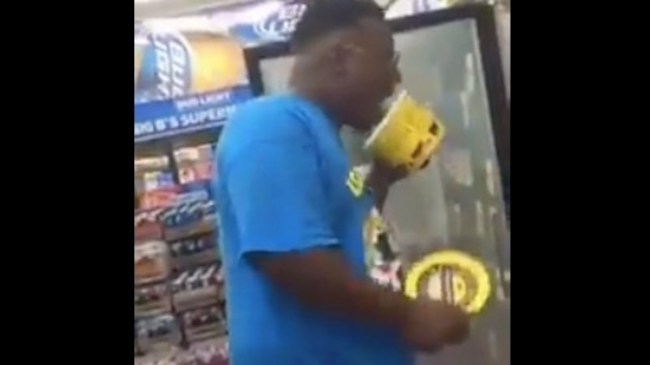 ENOUGH already. We live in a society, damn it. A society that has rules! That has boundaries! That has decency!

Or at least so I thought.

In case you’ve been living under a rock in recent weeks (in which case, can I pull through? Kind of jealous, to be honest), there’s this new internet trend/prank/challenge that sees the most depraved and dour among us opening a tub of ice cream at a store, licking the top, then putting the tub back into the freezer.

It is a truly disgusting habit and it must be stopped, so therefore, I have decided to become the hero that the internet both deserves and needs by challenging the next person to do this to some good old fashioned fisticuffs.

So, with all that said, I am hereby challenging 36-year-old Louisiana man Lenise Martin III to a scrap. All he needs to do is post bail and catch a flight to New York City and it’s going DOWN.

Martin — who is seen in the below video consciously opting out of the basic human decency that every single one of our fellow men should be treated with — was recently filmed licking and sticking his fingers into a Blue Bell ice cream container before putting it back onto the shelf.

This done gotten out of hand. Now his old ass should know better🤦🏽‍♀️@ILoveBlueBell @WAFB @Kiran_WAFB pic.twitter.com/TKX0jUikok

Luckily, the store’s management was quick to notice and had Martin’s legitimately disgusting ass arrested on the spot.

Investigators say after management became aware of the video, Martin returned to the store and showed the clerk a receipt to prove he’d purchased the ice cream. Management at the store later alerted investigators who questioned Martin.

Deputies moved forward with charges, including unlawful posting of criminal activity for notoriety and publicity, and tampering with property. Martin remains in jail and will have bond set by a judge Monday. [WAFB 9]

In a statement following Martin’s arrest, a spokesman for the Assumption Parish Sheriff’s Office reiterated that they “discourage anyone from copying this atrocious act.”

Additionally, the Sheriff’s Office spokesman said that notices were sent to local authorities informing them that “copy cat cases should be dealt with immediately and with the full extent of the law.”

And, if that doesn’t work, I will personally throw my hat in the ring to square up with every single one of these animals. Not because I want to, but because I have to.