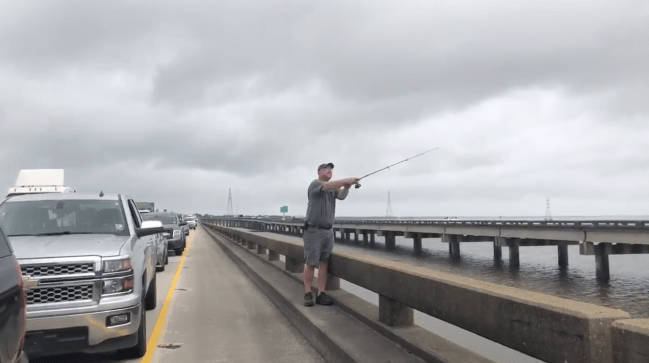 There is no better way to kill time than throwing a line in the water and trying to reel in a big fish. Well, this unidentified Louisiananimal did just that.

If you aren’t familiar with Louisiana topography, there is a lot of swamp land as you approach the Southern-most border of the state. Thus, there are a lot of causeways and trestle bridges in the region.

A causeway is a raised road across low or wet ground. They can run for miles without an exit. Same with trestle bridges.

The I-10 Bonnet Carré spillway bridge runs about 2.7 miles over a portion of Lake Pontchartrain in New Orleans. There is no getting off once you’re on— something that a large amount of commuters found out recently. 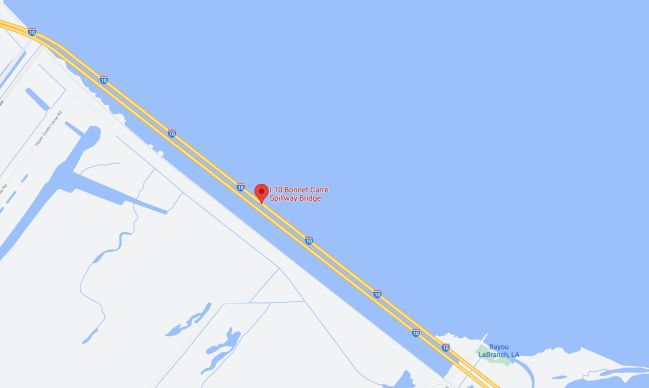 Just before 9:30 a.m. on Tuesday, a wreck shut down an entire portion of the I-10, including the bridge, for nearly five hours. Two 18-wheelers were involved and more than 50 gallons of diesel fuel was spilled.

I-10 East of the Bonnet Carre Spillway is closed due to accident at MM 214. Use Airline. Commuters are stuck in a two mile backup. pic.twitter.com/YPdamSanus

Unfortunately for the folks stuck behind the crash, there was no way out. They were stuck until the entire mess was cleaned up. For FIVE HOURS.

Fortunately, no injuries were reported, but that’s quite a long time.

Passing time on the Pontchartrain.

Stuck on the bridge, one man decided to forever entrench himself in the folklore of Louisiana. He hopped out of his truck, walked back to the bed and grabbed his fishing rod.

With nothing but time on his hands, he decided to walk to the edge of the bridge and try to catch him a biggun’.

What do you do when you are stuck in stand-still traffic over the Spillway??

We hope he catches dinner! pic.twitter.com/cOV6FilNu8

It is unclear who this man is, or if he caught a fish, but he’s playing chess while we play checkers— which are actually great ways to kill time in a traffic jam. Just not as good as fishing.