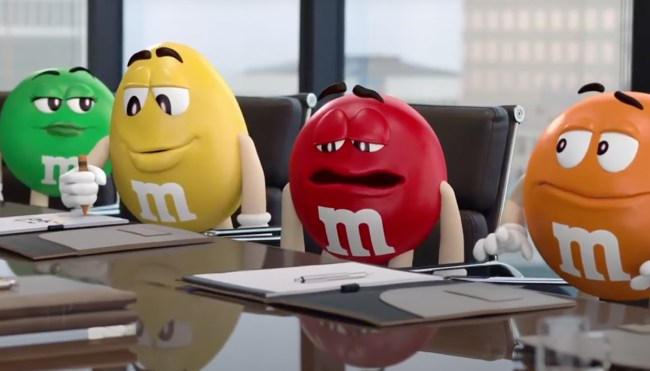 Based on the number of ad campaigns that use anthropomorphic interpretations of various foods to lure in customers, there’s nothing that makes consumers want to buy something quite like commercials featuring talking pieces of sustenance with funny quirks and unique personalities.

Mars has spent decades harnessing that particular strategy when it comes to marketing M&M’s, as the company has produced dozens of commercials featuring mascots representing various colors of the candy engaging in a wide variety of wacky hijinks (as well as some incredibly casual cannibalism).

While those mascots have evolved over the years, most of them are defined by certain personality traits: Yellow is basically the Forrest Gump of the group, Red is the domineering control freak who would probably be ousted as the CEO of a tech company in the wake of a scathing Wired exposé if he was a real person, and Green is—to quote Stacey in Love Actually—”the sexy one.”

However, it appears we’ve reached the end of an era. According to CBS News, the M&M’s mascots are undergoing a rebrand to make them better suited for a “more dynamic, progressive world,” which includes Green swapping out her boots for sneakers and Brown’s high heels being lowered to “professional heel height.”

I can't wait for the internet to inevitably obsess over the incredibly subtle new design changes to the M&M characters. pic.twitter.com/Y03C1wBYkW

As you’d expect, plenty of people online pounced on the chance to use the news of a reinvention no one really asked for to make jokes.

yellow m&m (slow-mo walking through a sleek, modernized m&m HQ office): i am not stupid. i am a cisgendered millennial who has been diagnosed with borderline anxiety disorder

They're finally about to make this canon M&M lore https://t.co/ewA5a3DFvV pic.twitter.com/3cfiKb0mqK

In an effort to make them more relatable and inclusive, the Mars Candy corporation has confirmed that M&M’s crunchy shell "is their skin” and that when you bite into them "they feel immense pain”

Instead of making the Green M&M less sexy, they should’ve made them ALL sluttier https://t.co/uumaGRZ28E

I was feeding my 3 year old breakfast just now when she put down her spoon all of a sudden and said, “I’m glad the green M&M isn’t wearing those foolish boots anymore. They really did make her look like a cheap whore.” I’m just proud to be raising such a thoughtful kid.