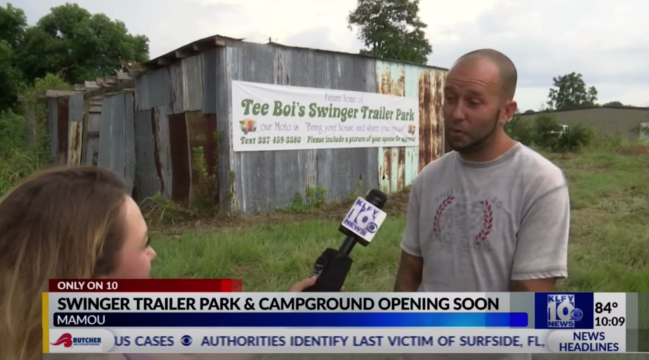 The state of Louisiana has really outdone itself this time. A new trailer park is set to open in the heart of the Bayou state and it’s exclusively for swingers.

Mamou, Louisiana is located about three hours north of New Orleans and sits firmly in the middle of cajun country. The population of the small town hovers just over 3,000 residents but it’s about to grow when Tee Boi’s Swinger Trailer Park opens up in 2022.

If you are unfamiliar, Merriam-Webster Dictionary defines a “swinger” as someone who engages freely in sex. The term more commonly refers to a person who gets down with group sex or frequently swaps sexual partners. Many times, the swingers are either involved in an open marriage or relationship.

Tee Boi’s Trailer Park will welcome swingers from across the country to “bring your house and share your spouse.” It is the best tag line of all-time.

Owner David Aucoin is about as cajun as it gets and he says that the park is filling up fast. He hopes to have everyone moved in by Memorial Day next year.

“You can come to Mamou for many good things and this will be one of them,” he said.

While that statement is certainly up for debate, if swinging is your thing, it sounds like a paradise full of diverse people.

As for the ones who are shy, Aucoin says, “hell with them.”

337-439-3380 is the number if you’re interested, but one of the requirements is that you send a picture of your spouse for approval.

‘I’d be a fat frog’s butt if it’s not a real number,” Aucoin said. Whatever that means, it sounds like this is happening. Reserve your space now!