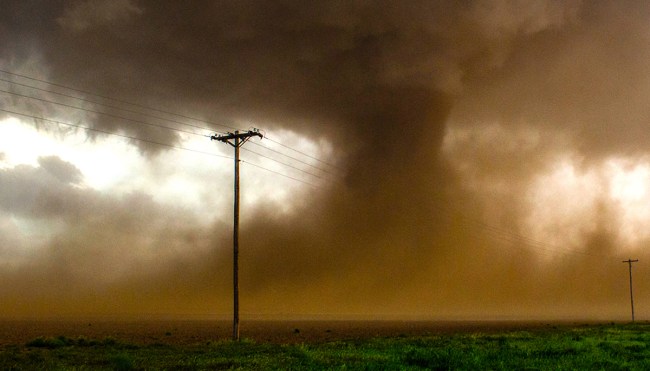 If I had to make a list of the worst places to find yourself when a tornado strikes, I’d probably put “on a golf course” pretty close to the top based on the options you’ll typically have when it comes to seeking shelter.

Unfortunately, that’s the exact scenario Cliff Horton found himself in earlier this week when a twister suddenly formed in Georgia’s Bryant County. According to First Coast News, Horton was at Black Creek Golf Club in the town of Ellabell on Tuesday when the weather suddenly went south, and he found himself in the direct path of a storm that would ultimately claim the life of one person and leave nine others injured.

Horton was thankfully able to seek shelter on the porch of what appeared to be the clubhouse before pulling out his phone to record a series of videos that went viral after his stepdaughter shared them on Twitter.

The first clip features the buildup to the wild events that unfolded in another, as he also captured the roof being blown off of the building while responding to that development in what is arguably the most casual manner possible considering the situation he found himself in.

not my stepdad standing in the middle of a tornado in ellabell??? pic.twitter.com/F5Ero4b50R

The outlet also obtained a short clip Horton filmed after thankfully making it through the scary encounter unscathed, and it’s pretty clear he was lucky to walk away from it based on the carnage the tornado left in its wake.

I think “Holy crap” is a pretty good way to sum things up.