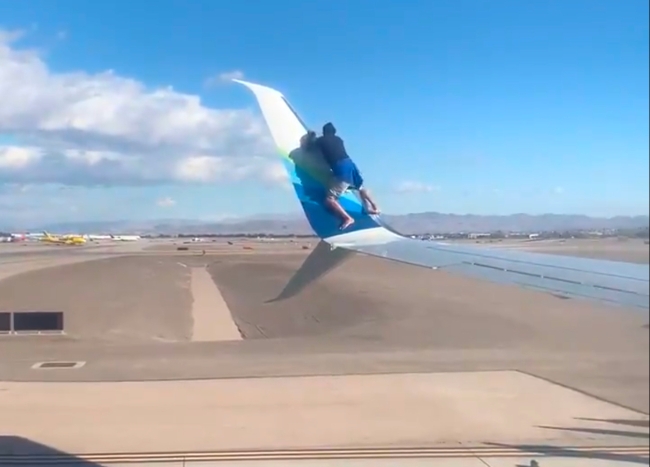 What happens in Vegas, sometimes makes the news, especially when a guy tries to climb the wing of a plane right before takeoff.

A man was arrested at McCarran International Airport in Las Vegas after climbing onto the wing of a plane on the runway.

The airline told CNN that an Alaska Airlines flight headed to Portland, Oregon, was preparing to taxi when the pilot noticed a man on the runway approaching the Boeing 737. He immediately alerted the control tower.

The man had allegedly hopped a perimeter fence.

Las Vegas police responded to the call and arrested the man.

Video taken by a passenger shows the man walking on the wing, taking off his shoes and socks, and attempting to climb up the side of the wing. As the police approach the man, he attempts to slide down the winglet and falls onto the tarmac.

Appeared to be an interesting day at McCarran today. pic.twitter.com/M7vv3Gh6oT #vegas

And in case the incident wasn’t scary enough for passengers inside the plane, the flight was scheduled to depart at 12:30 p.m. but the delay led to a 4:48 p.m departure instead.

Officers took the amateur daredevil into custody took him to a local medical facility. The Las Vegas Review-Journal reported that the man likely suffers from a mental illness.