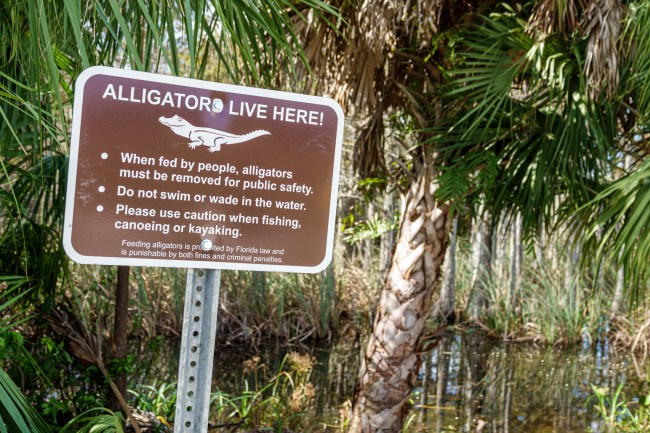 A viral video making the rounds on the Internet shows a man prying open a gator’s jaw to save his dog from getting eaten alive.

Alligators have the second strongest bite strength of all animals, but that’s not even close to “old man strength” trying to save his dog! 😱💪👨‍🦳🐶🐊 pic.twitter.com/h5LLYBkjg7

The video was apparently taken in Estero, Florida and the incident was caught on a wildlife camera from the Florida Wildlife Federation and the fSTOP Foundation.

WINK News caught up with the man in the video.

Richard Wilbanks says his instincts and adrenaline kicked in when a gator snatched his dog, Gunner, recently and dragged him into a pond. He immediately jumped into the water to save his pet.

We spoke to Wilbanks Friday, and he called the encounter a learning experience.

“He just came out like a missile,” Wilbanks said.

FWC said serious injuries caused by alligators are rare in Florida, but hopes the video of Wilbanks’ encounters leads to a better relationship between people and wildlife.

Wilbanks goes on to say there he had no second thoughts about putting himself in harm’s way to rescue his dog.

“They’re like children to us, so there was no second thought whatsoever, Wilbanks said.

“He had one little puncture wound, and … my hands were just chewed up,” Wilbanks said.

Even after being dragged underwater in the jaws of a gator, Gunner is doing fine.

“Fortunately, I was in a position that I was able to save Gunner’s life,” Wilbanks said.