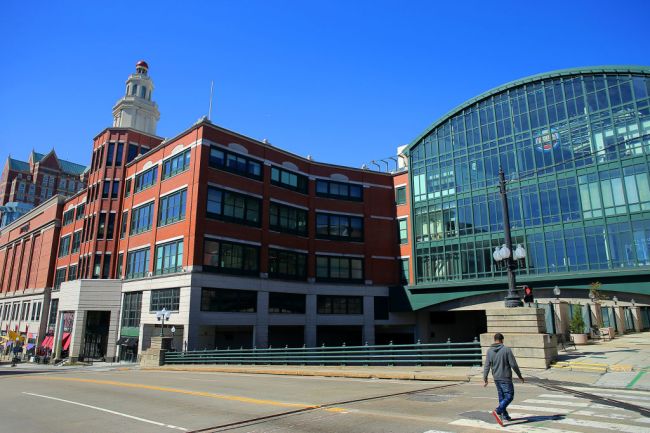 Have you ever dreamed of living in a shopping mall? Maybe sneaking to grab some Cinnabon and Sbarro? One man lived the dream and secretly built an apartment in a Rhode Island shopping mall.

The Providence Place is a $500 million shopping mall that features 161 stores that was built in 1999. Michael Townsend noticed an odd space during the construction of the mall that wasn’t meant to be a store, but may have been a design flaw or oversight.

Years later, Townsend lived with a collective in an abandoned warehouse. However, construction of another retail space leveled the warehouse and made it a parking lot.

The group wanted some revenge on the developers that were making retail spaces. The group started a project named: “Trummerkind” – the German words for “children of the ruins.” They vowed to live at the Providence Place shopping mall for one week.

Townsend recalled this unusual and unoccupied space at the mall. He went back to the hidden space and found that building materials from the construction years earlier were still there.

In 2003, Townsend moved into the 750-square-foot space at the Providence Place. Townsend and seven other artists made the forgotten space into a livable, fully-furnished apartment. The area had blankets, a large hutch filled with china, and a Sony PlayStation 2 – which was eventually stolen by outsiders.

They plugged extension cords into the mall’s electric outlets to power the devices in the concealed condo. There was no running water, but the group utilized the mall bathrooms.

The artists constructed a wall out of cinderblocks to hide the secret room. They added a plain white utility door.

The artists stayed in the space for as long as three weeks at a time.

Finally in 2007 – four years after the group had initially moved into the secret space – the area was raided by mall cops. An artist from Hong Kong was greeted by three security guards when he attempted to enter the secret condo.

Townsend was the only one of the artists to be charged with trespassing. He pleaded no contest to the criminal charges. He was given probation by a judge and banned from the mall for life.

Providence Place Mall spokesman Dante Bellini Jr. described the secret apartment as “an area with stuff in it.”

Providence Police Maj. Stephen Campbell said, “I was surprised at what he was able to accomplish. But what he did was clearly criminal. The mall is private property.”

Townsend said he had some renovations in mind before the mall cop bust. He planned on making the apartment “super-sweet” with laminated wood flooring two days before they were caught.

Townsend said he built the secret apartment “out of a compassion to understand the mall more and life as a shopper.”

Watch the video below on the incredible story of how a Rhode Island man and seven other artists secretly lived in a shopping mall for four years before getting caught.