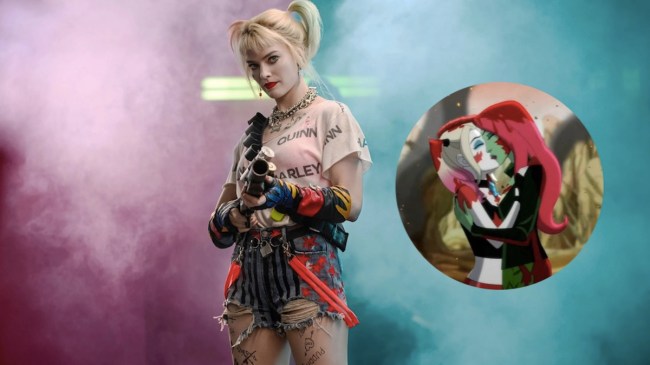 During a recent interview, A-list and seemingly always-working actress Margot Robbie — who has starred as Harley Quinn in the DCU since 2016 — expressed how desperately she wants to see the character in an on-screen romance with Poison Ivy, who hasn’t appeared in a live-action DC project since 1997’s infamous Batman & Robin.

“Honestly, when I pictured, I always picture like Poison Ivy in the comics. I don’t really actually picture an actress doing it, but I agree, that would be so good.” [via ComicBook]

What makes Robbie’s pitch perhaps more legitimate than ever, though, is the fact that her buddy James Gunn — the director of The Suicide Squad — is now the co-CEO of DC Studios and serves as the franchise’s creative mastermind. Gunn absolutely *loved* directing Robbie in the film and is obviously a comic book buff, which means he’s undoubtedly aware (and likely a huge fan) of the source material history between the two characters.

He’s also just generally forward-thinking enough to launch one of the brand’s most popular and marketable characters into a relationship with Poison Ivy because, well, it’s awesome. It’s why the Harley Quinn cartoon over on HBO Max has been such a hit for these last few years — the duo is electric together.

Now, as for who should play the role of Poison Ivy, there’s really only one choice, especially when considering they’ll have to serve as the foil to the Academy Award-nominated likes of Margot Robbie: and that’s Oscar-winner Emma Stone, whose ability to do deadpan humor would be a perfect counterbalance to Harley Quinn’s unbridled manic energy.

We’ve actually been banging this drum for a few years now, so if Warner Bros. does make the move for Stone, you’ll *surely* have us to thank.

Suicide Squad, Harley Quinn: Birds of Prey, and The Suicide Squad are all currently streaming on HBO Max.