Did Anyone Have A Lifetime Movie Starring Mario Lopez As A Sexy Colonel Sanders On Their 2020 BINGO Card? 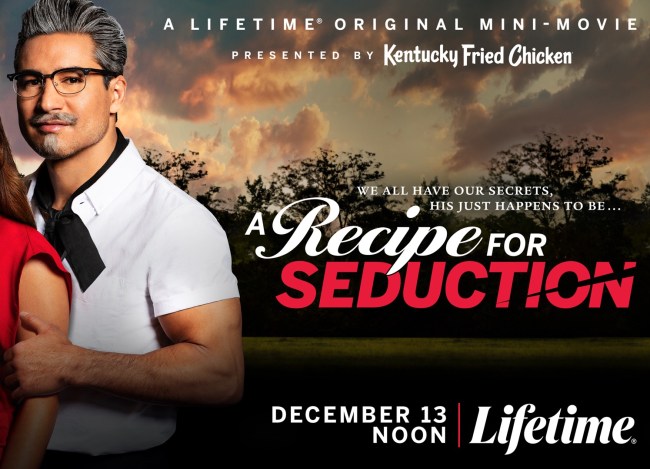 I haven’t eaten Kentucky Fried Chicken in YEARS. I had a pretty scarring experience a few years back when I made the mistake of ordering something other than fried chicken and I won’t get into the details here but dudes, stick to the flagship items on the menu or you might find yourself in my shoes and afraid to go back to KFC for a decade.

Anyway, I’m thinking it might be time to revisit the Colonel’s recipe thanks to this absurd spon-con from Mario Lopez and Kentucky Fried Chicken. They’re billing it as a ‘short movie’ running 15 minutes in length where Mario Lopez aka A.C. Slater will play a sexy Colonel Sanders in a Lifetime movie. I recently watched my first Lifetime movie ever. Two weeks ago. Some horrible Rom-Com that was simultaneously so good and so bad that I wanted to throw my iPhone at the TV and smash it but also wanted to immediately watch another one.

There’s already a trailer for A Recipe for Seduction and it took Twitter by storm yesterday with everyone unanimously agreeing that this might be the first good spon-con of the century. It’s also currently the #1 trending video on YouTube. The trailer’s only a minute and nineteen seconds long but I’m already all-in on this. Give me all 15 minutes now. I can’t wait until the December 13th premiere date. I need to know more ASAP.

Deadline has a full rundown of the plot:

Set to premiere on Lifetime on Sunday at 12 p.m., A Recipe For Seduction takes the television commercial to a new level. The Lifetime original mini-movie follows a young heiress as she struggles to pick between a rich suitor selected by her mother and the new house chef, Harland Sanders who brings more than his 11 herbs and spices secret recipe to the table. In Lifetime fashion, things take a turn for the dramatic, with the heiress’ mother and the disappointed suitor seeking to take out the KFC mascot himself. (via)

Mark your calendars because Lifetime and @KFC have partnered for a Lifetime Original Mini-Movie you don't want to miss! "A Recipe For Seduction" starring @MarioLopezviva premieres Sunday at 12PM. pic.twitter.com/nZJ2PXUR6G

I have to question why she didn’t get her name on the announcement? Why is Mario’s name the only one in the tweet? Whose decision was this?

I could show you a ton of tweets about how everyone to this news and made jokes about it but I think you get the point, right? Do you really need to see 50 tweets joking about a Sexy Colonel Sanders played by Mario Lopez or are you ready to get to the main event like I am?