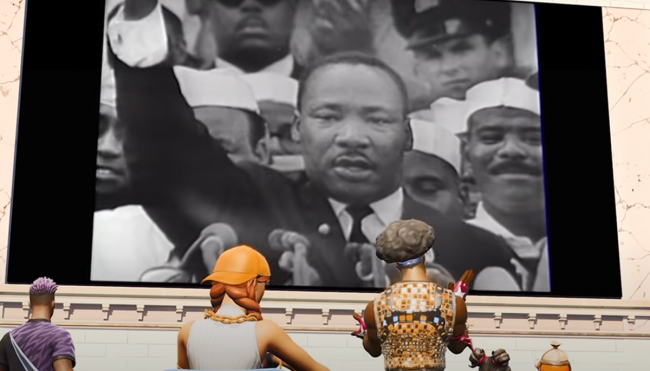 On August 28, 1963, over 250,000 people flocked to the Lincoln Memorial in Washington, D.C. to watch Martin Luther King Jr. deliver his iconic “I Have A Dream” speech. I’m going to go out on a limb here and assume most people reading this didn’t have the chance to attend the address in person, but anyone who missed out now has the chance to experience the next, um, “best” thing courtesy of…Fortnite?

This weekend will mark the 58th anniversary of one of the most seminal moments of the civil rights movement, and the folks at Fortnite apparently decided there was no better way to commemorate the occasion than giving players the chance to travel back in time to attend the virtual version of the speech that’s been added to the game.

According to Playstation, “Celebrate MLK” is an interactive adventure that will “teleport players nearly 60 years in the past to a re-imagined Washington, DC called D.C. 63.” and features “museum-inspired points of interest and quests you can complete with other players.”

Is it an interesting way to expose a younger generation to the sentiments MLK expressed on the steps of the Lincoln Memorial? I mean, I guess, but based on the reactions the reveal generated, I don’t think the announcement went over as well as Fortnite probably hoped.

Shut the simulation down! Unplug us now! https://t.co/Ksy41sbRC9

I didn't think it could get more cringe than David Guetta's "I Have a Dream" speech remix but I was very wrong https://t.co/HBtG830QCy

Desperately pumping the brakes on the metaverse car only to find that the lines have been cut https://t.co/JaEPCF8LXr

Lmaooooo nahhh you lying. What season of Black Mirror is this? https://t.co/KxWW4ganmp

We're inching ever closer and closer to a George Floyd hologram dancing on stage at Coachella by the day. https://t.co/Km9vtAfinz

While Martin Luther King Jr. may not be a playable character, other people questioned the optics of featuring him in a battle royale game where players earn points for shooting each other based on what unfolded on a hotel balcony in Memphis in 1968.

Making MLK a character in a shooting game is WILD. Capital Y. https://t.co/6JOwbkVu2A

The game about shooting people with guns is having a MLK retrospective. You can't make this up lol. Malcolm X gonna be in the upcoming Assassins Creed I guess. https://t.co/ThELQxZIel

I get what Fortnite was going for here, but this ain’t it, chief.