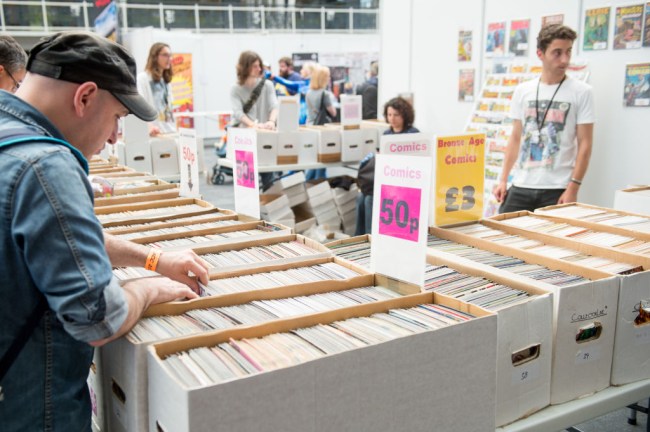 If you get your hands on a time-traveling DeLorean, you might want to set your destination to 1938 and pick yourself up a comic book. But not just any old comic book. When you get back to 1939, buy Marvel Comics No. 1, but remember to bring a dime because the price of this classic comic book was 10 cents back then. It will be a nice little investment since the vintage comic book just sold for a record $1.26 million.

The very first comic book ever produced by Marvel went up for sale on Thursday. The comic book was first released by pulp magazine publisher Martin Goodman’s Timely Comics, which later became Marvel. The comic book was the first to introduce readers to characters including Human Torch, Angel, Sub-Mariner, and the Masked Raider. The rare comic book was said to have only changed hands a few times.

The original copy was allegedly purchased from a newsstand rack by a mailman in Uniontown, Pennsylvania, for 10 cents, according to Heritage Auctions, who sold the famous comic book.

Marvel Comics No. 1 sells for $1.26 Million at Heritage Auctions, is Most Expensive Marvel Comic Ever Sold! pic.twitter.com/x3gihf1pmy

“Without question, this is the granddaddy of all Marvel Comics, without which we would not have the characters and stories we enjoy in today’s comics and feature films,” said Ed Jaster, Heritage Auctions senior vice president. “This is a historic copy of a historic comic book.”

The first copy of Marvel Comics was sold in very good condition and was deemed the “finest known copy” of the comic book. The “near-mint condition” comic had a 9.4 rating out of 10. Heritage Auctions sold Marvel Comics No. 1 to an unknown bidder in Texas.

Before the landmark sale of Marvel No. 1, the previous record-holder for most expensive Marvel comic belonged to Amazing Fantasy #15, where Spider-Man makes his triumphant first appearance. That comic book sold for $1.1 million in 2011.

However, the Marvel comic books don’t come close to the most expensive comic book ever sold. The Action Comics that was published in 1938 and is where Superman made his debut sold for a whopping $3.2 million in 2014 on eBay.