John Mayer, Cardi B, Green Day, Luke Bryan And Others Read ‘Mean Tweets’ And Get Torched By Trolls 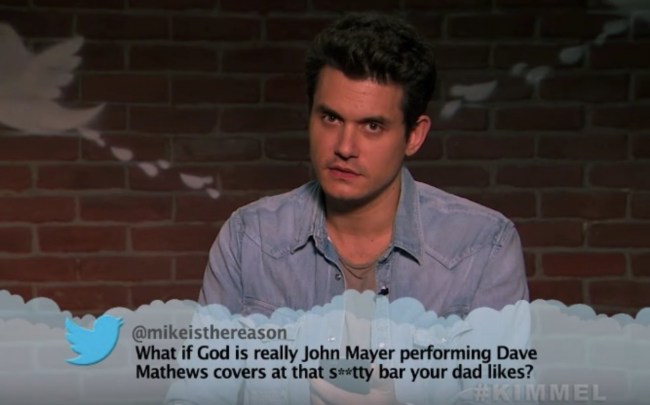 One of the cardinal rules on the Internet is ‘never read the comments.’ Unless you’re some sort of masochist, reading the comments will almost never end well for you.

And there’s almost certainly a correlation between the number of comments and the more the person’s getting torched. 2 comments? Sure, go ahead and read them. 25,000 comments? Maybe consider setting your Instagram to ‘private’ for a few weeks.

One of the things that’s so great about ‘Celebrities Read Mean Tweets‘ on Jimmy Kimmel Live is that Jimmy’s flipped this on its head and forced these celebrities, athletes, and musicians who generally live in a bubble to step out into reality for a few moments and read some of Twitter’s most savage comments.

As is always the case with these, some are better than others. It’s not the insults that ever seem to strike to the core of these musicians reading mean tweets but it’s the completely obscure references that seem to summarize a person’s entire career in one tweet and do so in a way that sucks all of the wind out of their sails and sends them crashing back to reality, to a time before they were famous. I’m referring to the Leon Bridges ‘mean tweet’ here because it’s so specific it manages to be completely spot on.

Honestly, if God is John Mayer performing DMB covers at that shitty bar my dad loves then I’m looking forward to those pearly gates because John Mayer puts on the best damn show around. Between his solo acts + touring with The Dead, he’s one of the most talented guitarists in the game and could breathe all sorts of new life into those DMB covers.

You can go ahead and sign me up for that shit right now because it sounds excellent.