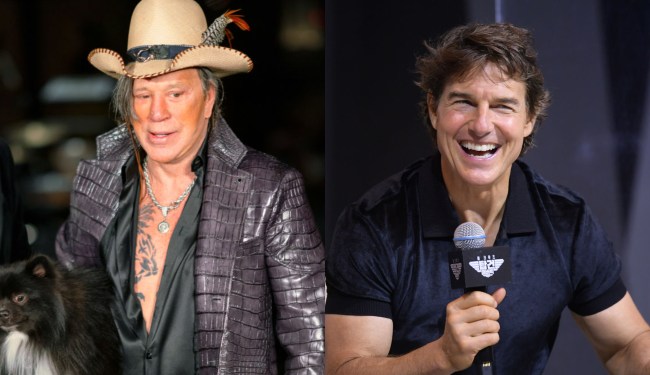 After two years that saw the industry pushed to the brink, movie theaters are finally and fully back in a big way, as the rampant success of Top Gun: Maverick has been the most promising sign for the business since late 2019.

Despite being delayed for three years, Top Gun: Maverick has gone on to earn over a billion dollars at the global box office, making it one of just 50 movies to ever reach that behemoth benchmark.

Apparently, according to Mickey Rourke — an actor who I can guarantee you probably haven’t thought of for about a decade — the star of Top Gun: Maverick, the iconic Tom Cruise, is “irrelevant” because he doesn’t take on roles that “challenge him.”

And on one hand, Rourke is *sort of* right: Cruise no longer dramatically challenges himself — he hasn’t been nominated for an Academy Award since the year 2000 when his work on Magnolia earned him a Best Supporting nod — as he hasn’t taken on a truly actorly part in 10 or 15 years, at least.

But that certainly DOES NOT make him irrelevant, as Cruise — alongside the likes of Leonardo DiCaprio and Brad Pitt — is one of the last remaining traditional Hollywood movie stars that can open a film based on the reputation of their own name. While Top Gun: Maverick is the latest example, don’t be surprised if Cruise repeats the trick next summer with Mission: Impossible – Dead Reckoning Part One.

As mentioned above, Top Gun: Maverick — the most successful film of Cruise’s FIVE-DECADE-SPANING career — has currently made over $1.2 billion and counting. Rourke, on the other hand, will next be seen starring in The Palace, which will be directed by Roman Polanski — the disgraced director who fled the United States in the late 70s after being arrested and charged for drugging and then raping a 13-year-old girl. Perhaps Rourke is “challenging” himself by erasing any sense of dignity he had by deciding to work with Polanski.

While he’s remained plenty busy starring in B-movies and direct-to-DVD films, Rourke hasn’t starred in a major release since 2014’s Sin City: A Dame to Kill For.