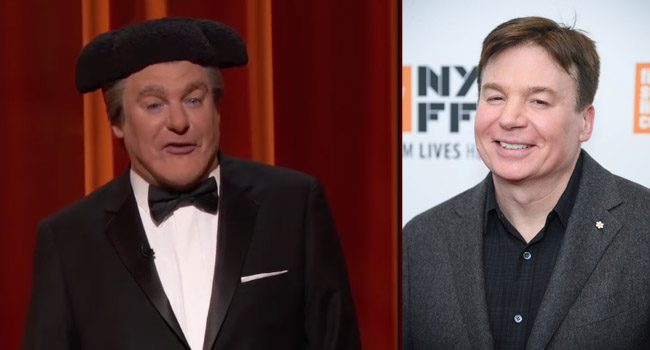 This might be the best prank pulled off since Andy Kaufman and Tony Clifton ran amok back in the late 1970s. For months people have speculated as to who this Tommy Maitland, the 72-year-old British host of ABC’s reboot of The Gong Show, really was. Now we know for sure that it was Austin Powers and Wayne’s World star Mike Myers this entire time.

In the trailer for the show, ABC announced that “legendary host” Maitland was making his American debut.

ABC even created a very lengthy fictional biography for Maitland on The Gong Show’s website. Here’s how it begins…

Born on July 7, 1944, Thomas Winston Maitland (his middle name is a tribute to Winston Churchill) grew up in Neasden, GLC, Borough of Brent, where his father was an actuary and in the Merchant Marine and his mother was in the RAF. After a failed stint as a pipe fitter’s apprentice, Tommy joined the British Army at the tender age of 15. He later joined the Entertainment National Service Association (ENSA), where he got to know some of the UK’s biggest comedians. He played the ukulele, told jokes and drummed (though he drummed badly), and he ended up hosting the show – a talent he would later be known for. He was voted ENSA Entertainer of the Year, for which he was given a guarantee to appear on British radio. He later worked as an announcer for the British radio show, “The Whosey Whats,” and got small roles in the “Carry On” films – either as the over anxious compart at a men’s club or the strict union pipe fitter. He also appeared in the TV series, “The Lord Mayor,” as the cheeky mayor of a mythical town in East Anglia, who struck it rich because they sat atop an oil field.

Executive producer Will Arnett first introduced Maitland to the world back in may on Jimmy Kimmel’s show.

Now, pretty much everyone had a good inkling that Maitland was, in fact, Mike Myers, but no one related to the show would admit it. However, on Tuesday it was finally confirmed.

“Celebrated film and television actor/comedian Mike Myers has finally confirmed the rumor that he is, indeed, the show’s host – British comedic legend Tommy Maitland,” the Disney-owned broadcast network said in a media release, ripping the lid off the worst-kept secret in Hollywood.

“Being the host of ‘The Gong Show’ is a blast! Pure fun,” said Myers. “It is with great delight that I can finally admit that there is indeed a Tommy Maitland, and that I portray him.”

The reveal also came with the announcement that the show has been renewed for a second season. Not that Will Arnett was willing to give up the charade just yet.

“I was just as surprised as the next guy when I heard ‘The Gong Show’s’ host, Tommy Maitland, was a character portrayed by the insanely talented Mike Myers,” said Arnett. “Despite this shocking news, I’m in total awe of the man, and we are so fortunate to have him as our brilliant host.”