Why Veterans Deserve More As ‘The Biggest Fraternity We Have In This Country’, According To Miles Teller

As a human being, I will never pretend to understand war. I’ve never been to war. I will *probably* never go to war. I will never see the world through the eyes of someone who has been through that experience. But, like any red-blooded millennial male who came of age in the George W. Bush years, I have many close friends I care about who have been there. So has actor Miles Teller, 30:

“You’ve either been to war or you haven’t, man. You can’t fucking understand it if you haven’t.”

That’s the most important thing to know about his new movie, Thank You For Your Service. There are two theres there.

You won’t truly understand Thank You For Your Service unless you’ve been there, meaning war. There is also being the living hell of coming home from combat, often as a young man or woman with the rest of their lives in front of them.

Thank You For Your Service isn’t a war movie fetishizing the drama of battle or rah-rah shock-and-awe patriotism. It’s an after-war movie showing the hell of servicemen and women coming home to grapple with piecing their lives together, from estranged family and friends to unemployment and VA lines. It’s a movie with a purpose, albeit quite uncomfortable to watch unfold through the story of Adam Schumann, whose infantry battalion suffered eleven causalities in George W. Bush’s 2007 “Surge” in Iraq.

The agenda? Elevate discourse around the mental health resources veterans receive long after their deployments.

Teller plays Adam Schumann, the real-life subject of David Finkel’s book of the same name. I met with Miles just before the half of the Patriots-Jets game a few Sundays back to discuss. Somehow, the Jets ended that half tied before TB12 rose the occasion in the second half.

Teller jumps right in on just how bullshit it is to try to pretend to step in someone’s shoes who has been to the hell of war and back, as a matter of profession. Because, at the end of the day, “that’s what acting is, man.”

Teller: A lot of my buddies are in the military. I know the amount of pride that these guys have when they put that uniform on. And for me, being asked to play a staff sergeant in the Army, a guy who just finished his third deployment, a decorated war hero by all means, and then a guy who’s come back suffering from post-traumatic stress, that was a daunting task. I almost felt like, even just pretending to do– because that’s what acting is, man. It’s like pretending to do it– I felt there was something actually kind of unethical about that, or that’s disrespectful for me to act like I’ve been to war. Because you’ve either been to war or you haven’t, man. You can’t fucking understand it if you haven’t.

I think a lot of military people would agree with you on that.

The response that we’ve been getting from the veteran community, though – and look, dude, like I said, a lot of my buddies are veterans or active. These movies get so brutally criticized for their authenticity. And I feel like a lot of movies try and Hollywood it up and they don’t actually pay respect to the creed or to the branch that they’re portraying. The response that we’ve been getting has been overwhelmingly positive. That’s what we did. We wanted to make it authentic first and then make a movie second. 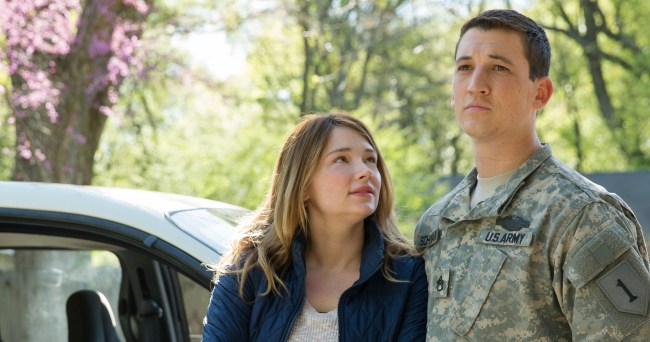 In approaching the subject of PTSD and what it’s like to return home, would you dip into your experience within your friend group? Or was it more about researching that elsewhere?

Because I had a real person to kind of go off of, my responsibility was to Adam to tell his story.

I wasn’t really taking liberties here, man. I really wanted him to feel good about what I was doing because I’m putting the darkest moments of his life on screen. The guy lived through all that.

A lot of my boys are special-teams guys, like my frickin’ great buddy from high school. A little skinny, scrawny kid. He was the only junior on JV soccer. A lot of our buddies were wrestlers, like tough dudes. He was not that. He ended up being SEAL Team Five, and now he’s SEAL Team Six. So he just turned into this bad ass, which we have no idea where it came from. Those guys are– they’re a different– it’s a different soldier. They’re almost fighting a different war. Their deployments are shorter. The amount of training they go through is much more extensive. So there weren’t comparisons to my immediate friends.

This movie is certainly not a recruiting tool…

Culturally, how do you think it’s going to elevate the after-war story?

Yeah. There’s a couple of things there, I guess. I felt like, by personalizing, making something as personal as possible, by making it about these people’s lives– by personalizing it, you also make it universal. And it’s not just veterans. It’s mental health in general. I think that everybody in their life will go through a traumatic experience. Everybody will have to go through that. And that’s what this is, man. It’s unpacking trauma.

These guys just happen to experience intense trauma consecutively during war. And then they’re coming back for it.

And I think there’s a couple of things: I think it humanizes it. I think that this is a war we’ve been in for 16 years and I think soldiers are, at this point, used for some kind of political narrative, or they’re used as kind of pawns in some kind of big propaganda scheme.And look, we have millions of veterans living in this country with post-traumatic stress, not just from this war. People can read about it: 22 vets a day commit suicide.

The biggest fraternity we have in this country is the veteran community.

We’ve shown the movie in D.C. and Jason has really embedded himself in the VA. We’ve shown it to secretaries of the VA, who’ve seen it and have understood. I think this movie has helped put in front of their face and show them that, yeah, the VA is the solution. It’s not the problem, but it’s a bit of a broken system. There’s a lot of bureaucratic red tape. And you have all these Congressmen deciding the fates of millions of people. It’s tough.

To me, that’s what the flag represents. It doesn’t necessarily represent Congress. It doesn’t necessarily represent the military, although a lot of people in the military believe “absolutely, I fought for this flag and everything. You need to stand during the anthem.” You’ll get both directions, like “I fought for freedom of speech” and all this.  But yeah, I just think that’s what the flag is about to me. And as a country, it’s about the guy to the left and the right of you.

Regardless of what party you are, we should all have a sense of patriotism and nationalism. And look, these guys are coming back fucked up. And they’re taking their lives. And we need to do a better job of welcoming them home. I do think that’s on us to help these guys when they get back. 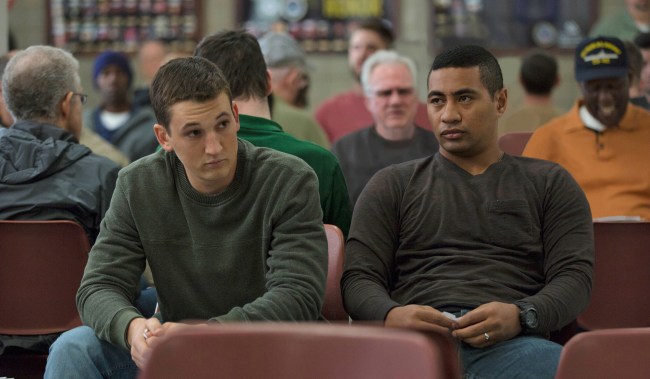 Yeah. There should be some funding for reintegration programs. These guys don’t have pension plans set up the way we do for police and firefighters. And yeah, the Pathway Home for Adam absolutely saved his life. The Pathway Home’s no longer around. They lost funding.

I’ve spent more time afterwards than I did during. I’ve been to Bethesda and I’ve been to Fort Belvoir. And yeah, any time I can lend myself to it. But they’re only getting to help such a small number of people. And the people in those programs– the veterans in those programs weren’t active. They feel bad that they were the ones who were lucky enough to get this kind of help. So really, it’s just tough, man. And I just really feel– I just really feel for these men and women.

I lost two of my best friends when I was 21, five weeks each other, and it was fucked up. And I probably should’ve talked to some therapists about it, but that’s– but I was able to deal with it at least with a sense of freedom about my choice, whereas these guys are losing their brother. They do a roll call. They’re fucking sobbing as they’re loading up their guns to go back out, and they never get time to process it. I don’t know how you process it regardless, but you need a professional to help you fucking deal with it.

Which brings us to a big thing in all of trauma therapy: The ultimate revelation in the movie is to just talk about it, something almost every single mental health professional advocates for, all the time.

Yeah, because the older generations didn’t talk about it. Those guys go to their grave with it. The whole “you don’t want to know what I saw,” thing.

Yeah, exactly. They almost don’t want to burden you– us– with that. And I just think that’s bullshit. My uncle, he was a Silver Star recipient in Vietnam. He was a platoon leader. And he got MS. He passed away from MS a couple of years ago and he felt like the MS was almost his penance for what he did over there.

To numb it or it makes you fucking– you can’t go to bed on it. I’ve been put on painkillers before. I can only imagine being on that shit every fucking day.

Thank You for Your Service hits theaters nationwide on October 27th.