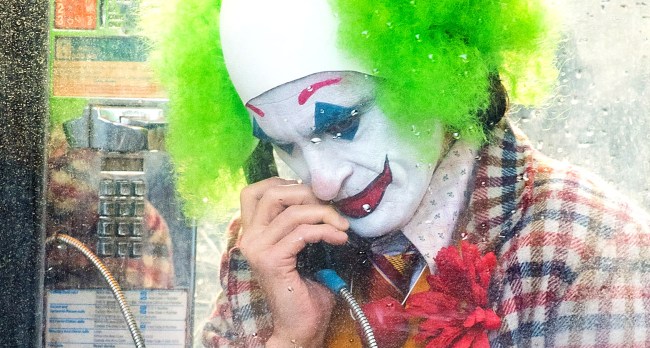 Joker, the eagerly anticipated movie starring Joaquin Phoenix, will officially hit U.S. theaters on October 4th. And while it has been getting rave reviews from those who have seen the film, there are many others who are concerned that director Todd Phillips’ take on The Clown Prince of Crime will incite violence when it opens.

Among those concerned are the families and friends of those killed in the shooting at a showing of The Dark Knight Rises in Aurora, Colorado in 2012, as well as the U.S. military.

Loved ones of the Aurora shooting victims have written a letter to Warner Bros. urging the studio to donate a portion of the Joker profits to gun-victim charities, according to The Hollywood Reporter.

Sandy Phillips, the mother of a 24-year-old girl who was killed in the shooting, was among those who signed the letter.

“My worry is that one person who may be out there — and who knows if it is just one — who is on the edge, who is wanting to be a mass shooter, may be encouraged by this movie. And that terrifies me,” she said.

The U.S. Military is also reportedly concerned about such threats as it has warned troops about the potential for a mass shooter at screenings of Joker.

An email obtained by Gizmodo reveals that service members were told to “identify two escape routes” should they attend the movie and if contronted with a shooter to “run, hide, fight.”

“Incel extremists idolize violent individuals like the Aurora movie theater shooter. They also idolize the Joker character, the violent clown from the Batman series, admiring his depiction as a man who must pretend to be happy, but eventually fights back against his bullies,” read a portion of the email.

“When entering theaters, identify two escape routes, remain aware of your surroundings, and remember the phrase ‘run, hide, fight.’ Run if you can. If you’re stuck, hide (also referred to as ‘sheltering in place’), and stay quiet. If a shooter finds you, fight with whatever you can.”

They added that “there are no known specific credible threats to the opening of the Joker on October 4th, but that screenings of the film present a “potential risk to DOD personnel and family members.”

A seperate memo from the Department of the Army, obtained by Gizmodo, stated, “The Fort Sill CID Office received an intelligence bulletin regarding a credible potential mass shooting to occur at an unknown movie theater during the release of the new Joker movie scheduled for October 4, 2019. The intelligence bulletin was published by Travis County, TX Sheriff’s Office and working with the FBI field office, they have discovered disturbing and very specific chatter in the dark web about regarding the targeting of an unknown theater during the Joker release.”

Warner Bros. issued a statement on Tuesday regarding the controversy surrounding their film.

“Gun violence in our society is a critical issue, and we extend our deepest sympathy to all victims and families impacted by these tragedies,” Warner Bros. wrote in the statement. “Our company has a long history of donating to victims of violence, including Aurora, and in recent weeks, our parent company joined other business leaders to call on policymakers to enact bi-partisan legislation to address this epidemic. At the same time, Warner Bros. believes that one of the functions of storytelling is to provoke difficult conversations around complex issues. Make no mistake: neither the fictional character Joker, nor the film, is an endorsement of real-world violence of any kind. It is not the intention of the film, the filmmakers or the studio to hold this character up as a hero.”

Considering that the United States is averaging more than one mass shooting per day in 2019, it is rather understandable that some people might be a little concerned.