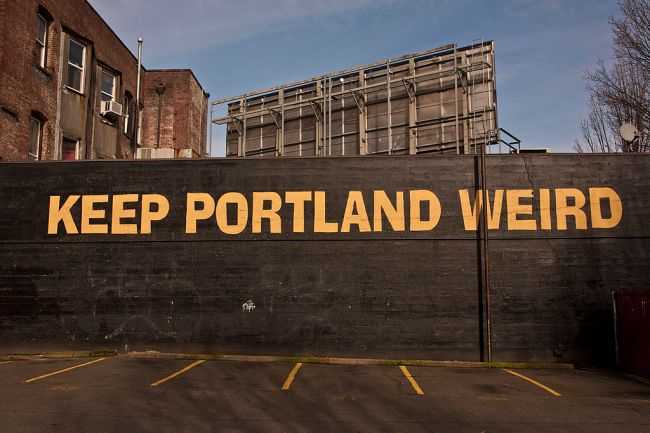 Everyone, even if they’ve never stepped foot in the city, knows that Portland, Oregon is weird. Just like Memphis is known for its barbecue and New York City is known for its pizza, Portland is simply known to be weird. It’s a blanket statement, but it’s true, and the city embraces it.

So when you learn that the smallest park in the world that also serves as a home to a leprechaun colony is located in Portland, you shouldn’t be all that surprised. The name of the park is Mill Ends Park, and it may be the most on-brand park relative to its city on the entire planet.

The park itself is just two feet across. Not two acres, two feet. The park is 452 very tiny square inches and is officially recognized as a city park in Portland.

The park was created by Dick Fagan, a World War II vet that returned to Portland and got a job as a journalist at the Oregon Journal. His office overlooked Naito Parkway and he became fascinated with a tiny hole in the median that was supposedly put there for a light pole. Fagan sounds like a guy that was really focused on his job and definitely didn’t do drugs.

A light pole was never placed in the hole, so it began filling with weeds and garbage, so Fagan decided to plant some flowers. The hole became the subject of one of his columns in the Journal titled ‘Mill Ends,’ which he referenced leprechauns living in this unbelievably small park. Fagan made an entire made-up leprechaun colony that lived in the park and deemed Patrick O’Toole the leader of the make-believe community. He even said he could talk to the leprechaun.

The park gained even more attention when the mayor at the time proposed a curfew on all city parks, to which Fagan responded to via another column threatening the leprechauns would put a curse on the mayor.

Have I mentioned Portland is weird yet?

Twenty-eight years after Fagan created the park, it became an official city park in 1976 on St. Patrick’s Day. The park itself has been decked out with tiny statues, a swimming pool, and even a Ferris wheel in the past.

The park suffered a horrible tragedy in 2013 when someone stole the lone tree in the park.

Keep Portland weird? It sounds like the city has that covered.