Hundreds If Not Thousands Of People Are Showing Up To ‘Minions: Rise of Gru’ Dressed In Suits In What May Be The Greatest TikTok Trend Of All Time 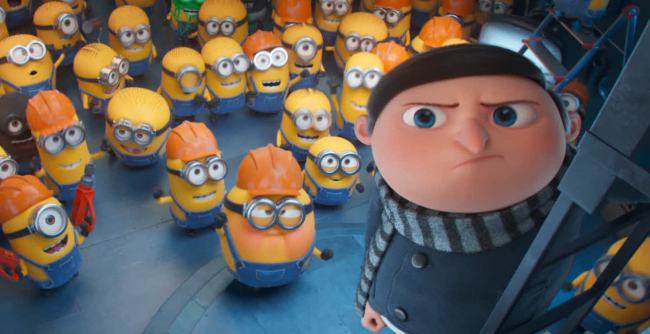 It is Sunday, July 3. It’s a holiday weekend and I’m hungover. Nevertheless, I’m about to bet on the Mets, crush glizzys and pound a few brews like it’s nobody’s business because that is simply what separates the men from the boys.

Still, despite all this, I’ve hopped on my laptop to write an article about TikTok teens showing up to see Minions: The Rise of Gru dressed up in full suits because it’s perhaps the greatest trend that the app has ever produced.

It’s like the Morbius meme has been taken to an entirely new level where it’s actually bleeding into reality. Perhaps more aptly, it reminds me of that viral Washington Post article from 2017 that tried to figure out why millennials’ humor, particularly when it comes to memes, is so often “weird, dark, surreal, and often completely meaningless.”

And this Minions trend is sort of the Gen Z evolution of that: the idea of showing up to a children’s movie in a suit is so wrapped in meme culture that it’s almost impossible to get to its core. Almost like a cousin of the “Lord Forgive Me” meme — taking something that’s clearly meant to *not* be taken seriously, such as Minions, and taking it so feverishly seriously that you wind up buying a $500 suit for a $15 movie ticket.

People are showing up to movie theaters in full suits to watch Minions: The Rise of Gru

This whole “dress up in full suits to watch the new Minions” trend on tiktok got me cackling like an idiot pic.twitter.com/NadlgL4f0K

minions rise of gru is the best cinema experience i have ever had. shoutout to the boys in suits who thanked us for coming at the end. 10/10 would recommend pic.twitter.com/Oxk0vaxFxc

watching Minions in Suits will be the peak of our lives pic.twitter.com/EM1qhqZOJX

Oh my god they're actually doing the "watching Minions in suits" thing here in Norway. pic.twitter.com/2Y3tL0cKOZ

I went to the theater to watch The Black Phone yesterday and there were 40 middle schoolers dressed in full suits to go see Minions, which confused me immensely until I saw this video.

I don't care about Minions but this is an amazing commitment to the bit. Gen Z are good kids. https://t.co/g1e3McakLr

literally at a showing of minions rise of gru and thered like 40 guys in here with suits and ties cheering for minions where am i pic.twitter.com/50ki7lzy3x

i work at the movies

teenagers have been pulling up to the movies in D R O V E S to see minions in fucking suits it’s the most ridiculous shit I have ever witnessed https://t.co/3C8iyzOYPQ

to everyone showing up to @Minions in suits: we see you and we love you. 🫶

we’ve had so many young teens come in to watch minions wearing suits. is this a tiktok thing

Around 30 guys in suits just came past my work (I’m next to the cinema) chanting about Minions: Rise of Gru and cheering… one offered me a Minions happy meal when I went out to see what was happening, I kid you not.

the shit you see in the city I swear 😭 pic.twitter.com/Ub0wsMOuEt

The popularity of the Minions movie isn’t just an internet meme, either, as the film has earned $128 million since it premiered, which is a record for July 4 weekend.