Mookie Betts Played Catch With A Young Fan In The Stands Between Innings, Made Fans For Life 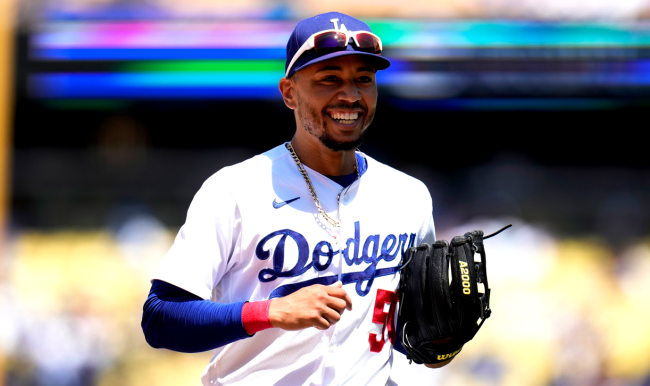 Monday night, during the middle of the third inning, Los Angeles Dodgers superstar Mookie Betts gave a young fan the absolute thrill of a lifetime.

Betts and the Dodgers were playing against the Brewers at Milwaukee’s American Family Field. As Betts ran out to warm up between innings, a young fan wearing a Dodgers shirt with Betts’ name on it held up a sign that read “Mookie wanna play catch?”

Betts didn’t just throw him a ball and move on with his warmups. He literally stood there and played catch with the kid until it was time to start the half inning.

As incredible as that is, what might be even more impressive is the fact that both Betts as well as the kid were spot on with their throws – no easy task when throwing a baseball to and from from a seat in a ballpark.

Mookie playing catch with a fan in the stands. 🥺 pic.twitter.com/s4wsBMBH2D

Gotta love the reaction of the kid when he was done playing catch with Mookie, putting his hands on his head as if to say, “Did that really just happen?!”

Bonus points to Mookie for letting him keep the ball too. That’s going to be one hell of a memento for that fan for the rest of his life.

Mookie Betts being a very good dude is not something new, by the way

Last year, Reds outfielder TJ Friedl hit a home run against the Dodgers for his first career hit and Mookie Betts knew it. So he spoke to the fan who got the baseball and made a very special trade for it.

“Those types of interactions are everlasting,” Betts said about the moment.

It’s moments like those which support a number of those famous sayings about the game of baseball over the years, especially, “How can you not be romantic about baseball?”

That was so cool. Typically maybe a player will actually acknowlege a fan, maybe, but physical interaction is very rare. I'm sure the organization frowns on it due to potential liability issue, but Mookie obviously is one of a kind #Dodgers # Mookie Betts

World class athlete and even more so as a human. Even if you don’t like the Dodgers how can you hate on that? Happy that world class gentleman plays for us! Go Blue!

I'm a loyal @SFGiants fan, but class, is class! Mookie has it...period! #respecK