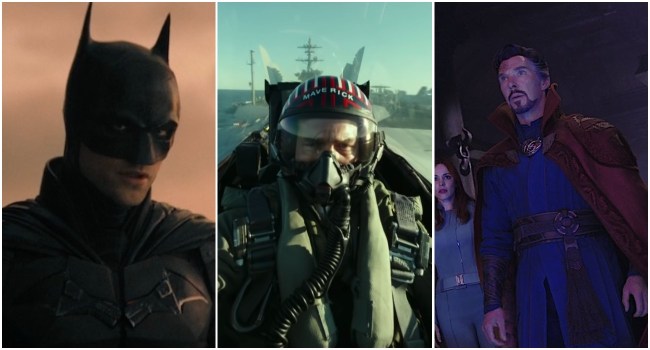 Ticketing website Fandango has conducted a survey of over 6,000 movie fans to determine the most anticipated films of 2022 — which is set to be an absolutely *stacked* year given all of the production and release delays that have occurred since 2020 — and the one thing they all have in common should be quite obvious at first glance, as all ten films are, of course, franchise films. In fact, The Batman is the only film on this list not to be a direct sequel to something.

Look, I have massive respect for the original Black Panther, but given the tragic lack of Chadwick Boseman combined with the ongoing Letitia Wright-related production issues has me concerned about the film’s ultimate quality. Granted, Marvel Studios — and director Ryan Coogler — should never be doubted, so I’m sure they’ll figure something out. But still, Black Panther: Wakanda Forever ahead of the likes of The Batman and Doctor Strange in the Multiverse of Madness (which could potentially feature similar multiversal shenanigans as Spider-Man: No Way Home) is shocking to me.

What about Bullet Train, the assassin thriller from John Wick, Atomic Blonde, and Deadpool 2 director David Leitch, which is set to star Brad Pitt, Sandra Bullock, Michael Shanon, Aaron Taylor-Johnson, Zazie Beetz, Brian Tyree Henry, and more?! Or Martin Scorsese’s western crime drama Killers of the Flower Moon, which features the tantalizing trio of Leonardo DiCaprio, Robert De Niro, and Jesse Plemons? Don’t even get me started on Damien Chazelle’s Babylon, a period piece about the end of silent-film-era Hollywood that’s set to star Brad Pitt and Margot Robbie. I love a massive blockbuster flick as much as the next guy, but we simply *cannot* begin to lose respect for standalone pieces of art.