Watch: Frightening First Trailer For The Movie ‘Us’ – Jordan Peele Breaks Down The Crap-Your-Pants Horror Movie 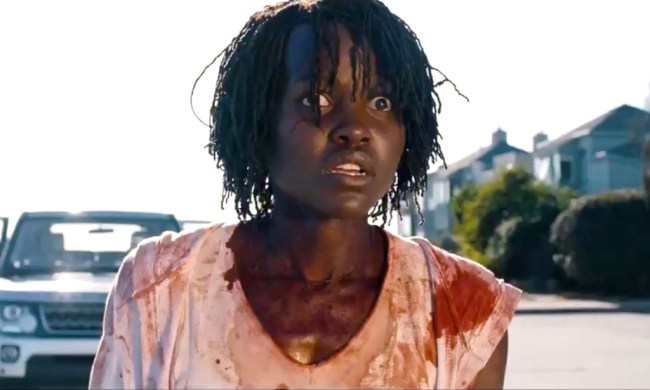 The first trailer for Jordan Peele’s new horror movie Us is here and it is petrifying. Seriously, I haven’t been this scared on Christmas since 2012 when my family ran out of bourbon at 4 pm and all we had to drink was old wine coolers that were left in the garage refrigerator from 1997. Following his critical and box office scary movie Get Out, Peele delivers Us and it already looks like the best horror flick in 2019.

Peele delivered a special gift right to everyone’s door on Christmas morning when the trailer for Us was released. The frightening flick features a family haunted by another family that looks exactly like them. There are even some creepy AF rabbits. How the hell did Jordan make rabbits creepy? The murderous family are called “The Tethered” and they have a special connection with their living counterparts.

Us features Lupita Nyong’o as Adelaide Wilson and her Black Panther co-star Winston Duke as Gabe, parents of children who are being stalked by their doppelgangers all while Luniz’s I Got 5 On It plays in the background and eventually transforms into a creepy remix of the 1995 hip-hop anthem. Peele said he used I Got 5 On It because it has a “haunting element to them and I feel like the beat in that song has this inherent cryptic energy, almost reminiscent of the Nightmare on Elm Street soundtrack. So those were the ideas that that song hit the bullseye on for me, and also, it’s just a dope track.”

Entertainment Weekly interviews Jordan Peele and the director breaks down the crap-your-pants trailer and the movie.

“Very important for me was to have a black family at the center of a horror film,” Peele said of his new movie. “But it’s also important to note, unlike Get Out, Us is not about race. It is instead about something that I feel has become an undeniable truth. And that is the simple fact that we are our own worst enemies. I dedicated a lot of myself to create a new horror mythology and a new monster,” Peele said. “I think that monsters and stories about monsters are one of our best ways of getting at deeper truths and facing our fears as a society.”

“I can’t think of a horror movie of this nature with a family in the center of it that uses a black family,” Peele explained. “So I knew just by putting an African-American family in the lead role, already we would be exploring cinematic uncharted territory – and I apologize if I’m missing something, which I probably am. I love films like Poltergeist, I love The Shining, The Amityville Horror and I love Amblin films, those Spielberg films that brought extraordinary situations to a family unit, and even though this movie is not about race, I felt like it was an important piece of the project to have a black family in the center. Get Out was one missing piece of the racial conversation and this is another one and we’re seeing a lot of great strides being taken by great artists like Ava (Duvernay) and Ryan (Coogler).”

Back to those creepy rabbits. Peele said he used rabbits and scissors in Us because “they’re both scary things to me, and both inane things, so I love subverting and bringing out the scariness in things you wouldn’t necessarily associate with that.” I’ll never see Peter Rabbit in the same light ever again.

“I definitely wanted to do a movie that started with this sense of invasion, this sense of the fear of other, the fear of the stranger from outside, which I think is a common fear in society these days, and then sort of force the characters to realize the invaders have their faces,” Peele said. “I didn’t want to make just a home invasion, though I utilized that imagery. I wanted the sense of an adventure that was not necessarily a claustrophobic one — that’s a feeling that turns me off watching. I wanted to make this expansive, I wanted it to have themes of night and day.”

Us creepily crawls into theaters on March 15, 2019, but tickets went on sale on Christmas.