Mysterious Monolith In The Middle Of Nowhere Completely Vanished – This Has Gotta Be A Viral Ad Right? RIGHT?!?! 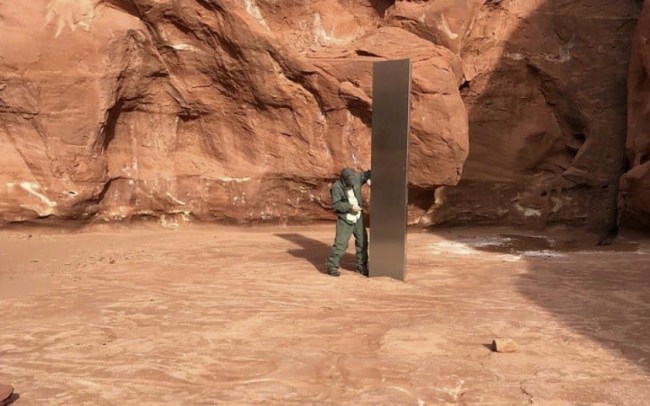 Last week, officials with the Utah Department of Public Safety Aero Bureau were counting sheep while flying in a helicopter. No, not “counting sheep” in the figurative aspect of trying to fall asleep, the officials were literally counting bighorn sheep in the southeastern part of the state. That’s when they spotted a shiny, silver metallic monolith in the middle of nowhere.

Well, that alien-like structure has disappeared.

“We have received credible reports that the illegally installed structure, referred to as the ‘monolith’ has been removed from Bureau of Land Management (BLM) public lands by an unknown party,” the Utah Bureau of Land Management wrote in a statement posted on Facebook. “The BLM did not remove the structure which is considered private property. We do not investigate crimes involving private property which are handled by the local sheriff’s office. The structure has received international and national attention and we received reports that a person or group removed it on the evening of Nov. 27.”

Let’s check in with the local sheriff’s office to see how they’re handling this reported crime.

“The San Juan County Sheriff’s Office is aware of the mysterious appearance and disappearance of the #UtahMonolith,” the police department wrote on Facebook. “While we take all reports of crime seriously, we do not have the proper resources to devote much time to the appearance and subsequent disappearance/theft of the structure that was discovered in a remote area of public lands within our county. However, with hundreds visiting the area during the last few days, perhaps someone saw something suspicious. If you recognize anyone from the lineup provided as being in the area of the strange structure on the night of November 27th, please let us know.”

Not sounding like the San Juan County Sheriff’s Office is a bunch of go-getters. The biggest story to ever hit their small desert town and they’re like, “Nah, not interested, we gotta make sure Earl the town drunk doesn’t smother himself in pot roast and try to seduce stray cats. Again. For the third time. This week.”

Apparently, all that was left behind was a pile of rocks.

Confirmed: The mysterious obelisk in San Juan County that garnered international attention this week has disappeared. It was likely removed sometime Friday night. The Bureau of Land Management said they were not behind the removal. pic.twitter.com/dsTzQFq5qr

How much does it suck for these influencer-wannabes who drove all the way from L.A. to Utah, only to get a photo with a pile of rocks? As my Aunt Edna always used to say, “The early bird gets the quality photo op.” Looks like you kids should have left the content house a little earlier. For your sake, I hope there’s a mural on your ride back.

Four friends had driven all night from LA in a rented Jeep, but didn't know the sculpture had been removed until they reached the trail. pic.twitter.com/QNDvZgHUZC

So where did the alien monolith disappear to? One possible explanation is “vigilantes.”

Some have speculated the sculpture was removed by vigilantes looking to protect the area from visitation damage. pic.twitter.com/sZfikCqV5L

While everyone loves a good, old-fashioned vigilante plotline, I don’t see a motive.

So what other explanations do we have? Did the aliens come back and retrieve their fancy technology? Was it an interdimensional portal and it collapsed on itself?

My money is on an elaborate viral marketing campaign. I think we’ve got a 64% chance that this same metal structure shows up in a cornfield in Iowa next month. In January, you’ll see this monolith sitting in the Okefenokee Swamp. Then on February 7, the baffling monolith will slowly descend on Raymond James Stadium in Tampa. The unit will touchdown on the 50-yard line, steam seeps from the erection. The walls of the unit fall to the ground and then…once the smoke clears, all you see is…a Subway foot-long hoagie.

An alien-like voice announces, “Subway sandwiches are out of this world.”

That’s the late-stage capitalism moment that we deserve.