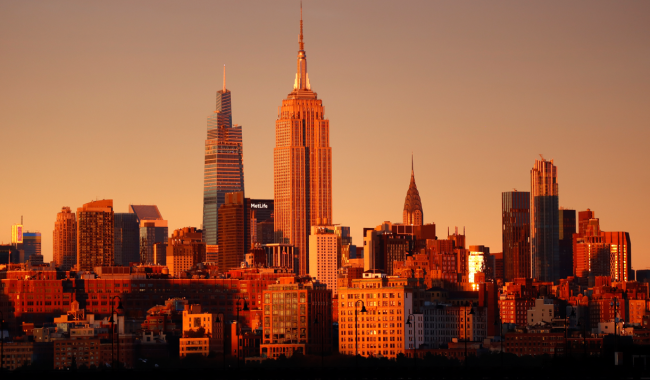 A man in a suit and dress shoes sparked quite a mystery this week when he was filmed by a bystander leaping from roof to roof on a high rise building 23 stories above Manhattan.

The man who shot the unusual footage, Erik Ljung, an Emmy award-winning film director and cinematographer, was working on a project across the street and says he was checking the light from the window when he spotted the man.

“I was like, yo, you guys got to check this out, this is some weird New York (expletive) going on,” Ljung told ABC 7 News.

“He was wearing dress shoes, which don’t have great grip and it was raining all morning, so for us, yo what is going on here?” he added.

“To me it didn’t look like he was in distress at any time, he looked fairly comfortable out there.”

The mystery man was making his daring leaps on the building at 90 West Street across from the September 11 Memorial.

“At first, I thought it was just some parkour kid, but the telltale signs weren’t there,” Ljung told WPIX News. “He wasn’t taking selfies, no one was videotaping him and he was wearing dress shoes and a suit.”

Ljung’s video soon went viral after he shared it on social media.

“Been getting a lot of questions… I have no idea what dude was doing,” he wrote on Instagram. “He was already hopping around from awning to awning when we first saw him. First from right of frame to left. Got to corner where o started filming (2nd slide), looks like he made a call and looked around for about a minute, then hopped back in the direction he came when we first saw him and then climbed in a window. It was wet out and he was wearing dress shoes. We were all watching like…”

“$20 says he was on the phone with Jigsaw,” someone else joked.

“My name is Joe Smizaski and I’m director of operations and I go out of roofs like this all the time,” said the mystery man.

He explained that he is in the waterproofing business and was checking things out before meeting an inspector there about removing a sidewalk shed.

He told Richardson that he’s done this dozens of times, with and without safety gear, and that this time he was not harnessed.

Smizaski said that if he had on safety gear while jumping like he did, the act would have been more dangerous and would have pulled him down.

As one person so aptly put it in the comments on Ljung’s video, “Only in NYC!!”