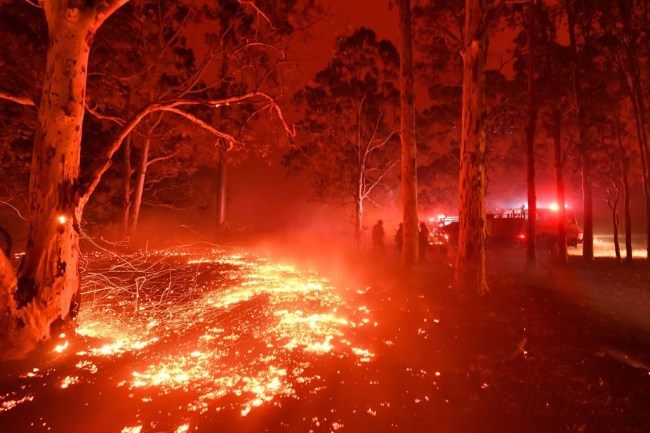 Since September, Australia has been besieged by massive bushfires that have wreaked fiery havoc all over the country. At least 20 people have died, 1,5000 homes have been destroyed, and there are reports that entire species have been wiped off the planet. But there are unexpected heroes stepping forward to help Australia — Instagram models offering nude photos.

The nude photos are already scalding, so they won’t extinguish the bushfires, but people are donating money, sometimes thousands of dollars, to help the Australians battle the out-of-control fires. At the frontlines in this war on the wildfires is model Kaylen Ward.

my side profile holds so much power pic.twitter.com/iY6H71IidL

Ward, who goes by the Twitter handle of “The Naked Philanthropist,” is offering naked photos of herself to anyone who donates money to help combat the fires. Thus far, Kaylen claims that she has raised $300,000 to help Australia during their time of need.

I had a professional go through my statistics in my Twitter messages and they have estimated that so far, $300k has been raised for the Australian wildfires. Although I am unusable to continue replying to DMs, they are still flowing in like crazy. Thank you all so much.

“I’m sending nudes to every person who donates atleast $10 to any one of these fundraisers for the wildfires in Australia,” Kaylen wrote on her Twitter account. “Every $10 you donate = one nude picture from me to your DM. You must send me confirmation that you donated.”

“It’s devastating and any normal person would be concerned and want to help,” she wrote on her Twitter account @lilearthangelk. “I saw so much media coverage about other things happening in the world, like when Notre Dame burned down and lots of people were posting and donating, but I didn’t see a lot of people doing that for Australia.”

Kaylen said she donated $1,000 herself to the fire recovery. The LA-based model thanked her Twitter followers when she reached the $10,000 mark, but much like her OnlyFans.com enthusiasts, things kept growing.

$10,000 and counting has been raised for the Australia Fires thanks to you guys! #AustraliaFires #AustraliaIsOnFire pic.twitter.com/4K3lPcNwFF

“This sounds ridiculous but I’ve got people I’ve hired to help sort through the DMs,” Kaylen said. “I’m also actually sending the pics I promised, one for each $10. Someone sent me $5000, so I’m sending 50 pics and videos.”

Other Instagram models have jumped on the bandwagon to raise money for Australia. Kaylen plans to visit Australia next week to continue to help, one nude photo at a time.

happy girl 👼🏼 I’m in Anguilla but next week I’ll be in Austria!!! I am so excited pic.twitter.com/66Ympk9zMV