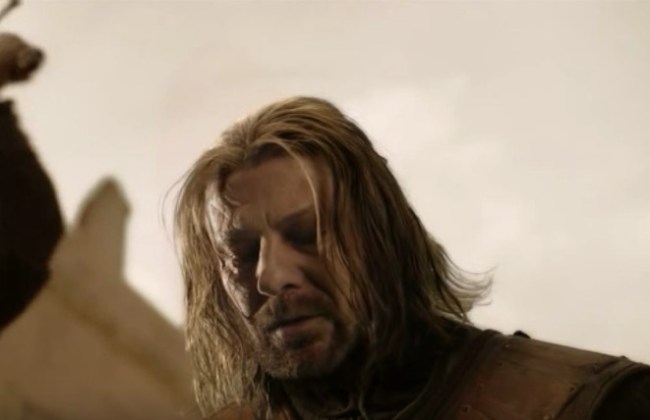 We’ve come so far in HBO’s Game of Thrones and by ‘far’ I mean that most of the characters we met in Season 1 are no longer with us as we look forward to the show’s final season next year. I wasn’t quite sure how to approach the topic of ‘spoilers’ here but given that we’re heading into the 8th and final season next year and the death we’re talking about happened back in 2011, I think it’s safe to assume that anyone reading this knows that Ned Stark was decapitated at the end of Season 1.

So, what was Ned Stark murmuring as his head was being chopped off in King’s Landing as his youngest daughter Arya looked on in horror? In a recent interview with the Huffington Post, actor Sean Bean who played Ned Stark discussed what he was saying in those moments.

Well, in an interview with HuffPost about his new show “The Oath,” Sean Bean set things straight.
Ned was … “just saying a prayer.”
“It appears that way, doesn’t it?” Bean said, alluding to the fact that, yes, it does appear as though the doomed man is praying. “I couldn’t be too specific, because I don’t know if religion [like that] was around in those days, whatever they were. I just thought, ‘What would you do if this were really gonna happen?’ You probably would pray. You probably would murmur some words and you’d keep it quiet. You’d keep it to yourself.”
“It’s quite subtle in that many people wouldn’t pick it up,” he added. “It was an interesting thing to do for me at that point. There’s not much you can do really, you’ve got your head on a block. That’s about the only thing you can do is murmur.” (via)

To me, it always looked obvious that he was whispering some sort of prayer. What else does a deeply devout man like Ned Stark say in that moment? He’s not senile and talking to himself. He’s not whispering sweet nothings to his wife. I thought it was pretty obvious what was happening but this was apparently something that some fans have been discussing for years….Now we know.

You can check out the full interview over on the Huffington Post by following that link.