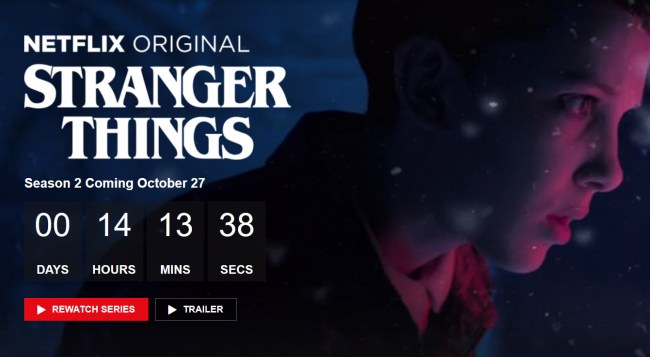 As anyone who has used their Netflix account over the past few days knows, the countdown to Stranger Things season 2 is officially on, but did you know there are also a couple of Easter eggs on the countdown page as well? Because there are.

And since we are fast approaching actually being able to finally watch season two of Stranger Things hopefully these hidden gems will tide us over until the clock finally strikes zero.

On the countdown page you may not have noticed (I didn’t until just now) that there is some kind of pulsating red orb on the right side of the screen.

See it? Did you know that you can click on it? I didn’t, but when you do you get a neat little treat as you are taken to the “upside down” version of the countdown page. I won’t show you what happens, but here’s a pretty much spoiler-free screencap.

But wait, there’s more… According to YouTuber laserfloyd there is a beeping sound on the countdown page that made him wonder if it had some sort of hidden meaning.

I noticed the beeping sound and figured it might be Morse Code. After a couple of days I remembered it and took a stab at translating it and initially I got CLSGT. I thought “close enough” but then realized there were missing letters/beeps. So, I narrowed it down more and managed to find them all to get “CLOSE GATE.” That’s pretty neat on their part.

Pretty neat indeed. Check out how he figured it out in the video below…

As an added bonus to help tide you over for a few more hours, the Stranger Things folks have been dropping some very odd clips on their Instagram page. I honestly don’t know what any of them mean, but they are certainly creepy and have piqued my curiosity even more. Cannot wait.