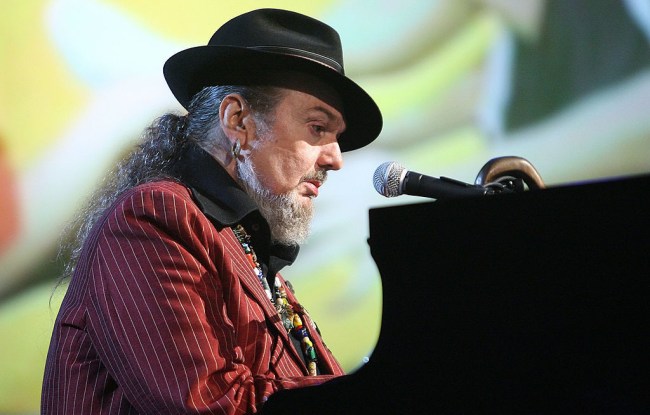 Welcome to the BroBible New Music Round-Up, where we see what new music has been released this week and can promise you that all of our merch is free of typos. For more follow me on Twitter:  @ryanoconnell79

In honor of his recent passing, celebrate Dr. John with this playlist of his best songs.

If you listen to a modern rock radio station, then there’s a good chance you’re aware of Silversun Pickups. They’re the band those stations play in between Cage the Elephant and Imagine Dragons.

They’re also the band who just released their fifth album, their first full length release since 2014’s Better Nature. In 2017 they released an EP, which featured remixes and acoustic versions of songs from Better Nature.

Widow’s Weeds was produced by Butch Vig, the man behind classic alt-rock albums from Nirvana and Smashing Pumpkins. Working with Vig had been a goal for the band, as well as a goal of mine, but I neither have a band nor the means to pull that off. Advantage: Silversun Pickups.

Recording for the album was split into two sessions because of Vig’s involvement with his band Garbage. The downtime proved problematic for Silversun’s frontman Brian Aubert, who found himself depressed and drinking. He was able to get help though and focus on songwriting, creating an album that he says “does have a mourning vibe, but it’s not sad. It’s change. It’s growing up and moving on and letting go of things.”

The band has yet to announce a full-fledged tour to support the new album, but are playing a handful of dates throughout the summer.

Neil Young has been spending his days lately going through his never-ending catalog of live shows. The results have been a string of releases, with the latest being TUSCALOOSA, recorded at the University of Alabama on February 5th, 1973. If you’re one of those people still buying physical copies of albums, you can either buy TUSCALOOSA as a single disc CD or on vinyl, where it’s spread out over three albums.

In February of 1973, Young was in between Harvest and Tonight’s the Night, a period he has described as “edgy.”

“It’s like those mellow songs with an edge. It’s really trippy to be down in Tuscaloosa, Alabama, and singing those songs from Harvest and the songs that we were doing for Time Fades Away before it came out.”

Recorded with the Stray Gators, the live album features Young classics like “Out on the Weekend,” “Harvest” and “Heart of Gold.”

Young’s next archival release will be the previously unreleased 1975 album, Homegrown.

While I would love to talk about the album more, I first need to mention that while writing this, I asked my wife if she knew of the band. She does know them and actually, saw them live back before we met. It was on a date. Our conversation then quickly ended and we sat in silence, watching game five of the Stanley Cup Finals.

Summer’s coming up; where funky, dance jams were made to live and flourish. Lets go, Yeasayer. Let’s go!

The group kicks off a run of shows next week, starting in the lovely seaside town of Portsmouth, New Hampshire.

Well, I will first admit that Hollis Brown sounds like the name of a bar. But Hollis Brown is a rock band, one that on their latest release, Ozone Park, is looking to shed the idea that they’re just a retro act.

“I think we wanted to make a statement to say that rock music can still be done in a modern way,” frontman Mike Montali said recently. “But that is still as good as some of those acts from the past.”

On Ozone Park, the band sounds like a cross between Alabama Shakes and the Black Crowes, both of whom are quality Southern rock acts. Hollis Brown are from Queens, though, which (checks map) is not in the south. The band however did record the album in Florida, so you know, it all comes out in the wash I guess.

Ozone Park is the band’s first album since 2015’s 3 Shots and their first with a new label, Mascot Label Group. The band will be on the road throughout the summer promoting the album,

Chris Stapleton “The Ballad of the Lonesome Cowboy”

Who better to sing a song entitled “The Ballad of the Lonesome Cowboy” than a fella who literally looks like a lonesome cowboy? No really. Have you ever seen a picture of Chris Stapleton?

The tune, a straight up, honky tonk number, comes from the upcoming Toy Story, and was written by Randy Newman, who has written some of the franchise’s most memorable tunes (i.e. “You Got a Friend in Me” and “We Belong Together.”)

Stapleton is on tour this summer, headlining the All-American Road Show. Newman though; that dude is just cashing those checks. One after another.

With beer not having broken his heart, allowing him to focus on his music, Luke Combs is capitalizing on the success of the aforementioned tune with this new EP. The five song EP features the chart-topping “Beer Never Broke My Heart,” as well as “Moon Over Mexico” and “Refrigerator Door.”

Combs has been on a hell of a run lately, with “Beer Never Broke My Heart” currently sitting at number 2 on Billboard’s Country Streaming Songs chart and number 1 on the Billboard Country Digital Song Sales chart. This One’s for You, Combs’ major label debut, has spent 35 non-consecutive weeks in the top spot on Billboard‘s Top Country Albums chart.

Combs won in one of the two categories he was nominated in at this year’s CMT Awards, which took place Thursday night. He won CMT performance of the year for “Beautiful Crazy,” which was from his CMT Crossroads performance with neo-soul singer Leon Bridges.

Combs is on tour this summer, playing a handful of headlining shows over the next couple months. 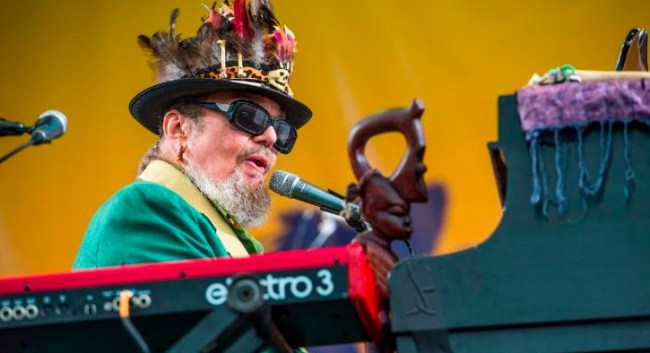 I’d still wait a few days before buying tickets, though.

Listen Up! Zac Brown Has Something to Say! 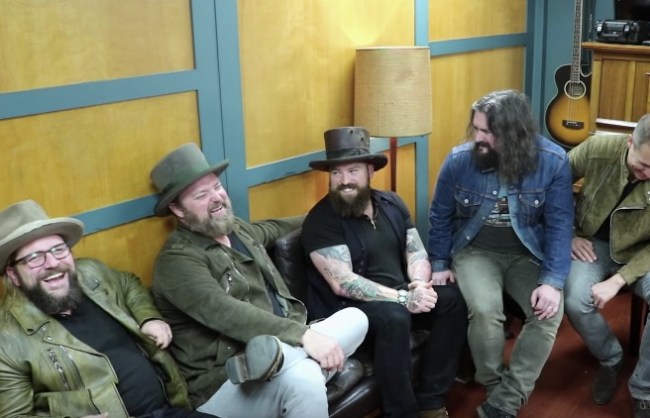 At Thursday night’s CMT Music Awards, the Zac Brown Band won for best group video for their song “Someone I Used to Know.” A well deserved win, I’m sure.

Now while I would never call myself a hardcore ZBB fan, I would definitely say that I appreciate their music and never turn down an opportunity to sing along to “Chicken Fried” while driving. To be honest, I’m not sure how you couldn’t at the very least, kind of like the band.

Apparently some folks do though, because when the group took the stage to accept their award, Brown had some pointed words for those who might not actually be cool with the band.

In case you missed that last part, he told people to “fuck off” and, wait a second, is that Kate Bosworth? I love her!

Anyway, I’m sure Brown’s use of language went over well.

But you know, Brown seems upset, these alleged haters seem upset, I’m sure the network is upset. Let’s all just listen to “Toes” five or six times, take a deep breath and make plans for the weekend, okay? 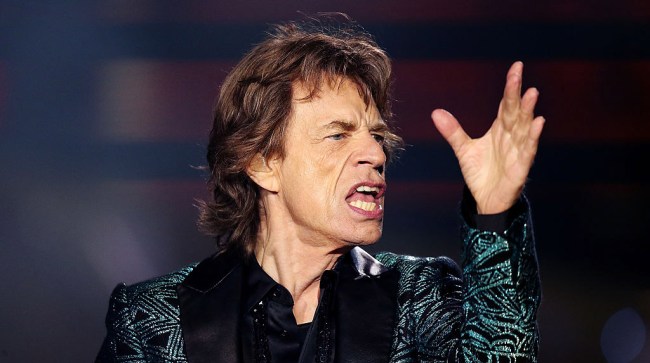 The Rolling Stones are set to head out on tour again, this time it’s the No Filter tour. I mean, at some point they won’t tour anymore, but I have no idea when that will be.

Either way, earlier this week they announced some of the openers for the tour and I have to say, I’d show up just to see some of these acts perform.

Gary Clark Jr., Lukas Nelson & Promise of the Real, Nathaniel Rateliff & The Night Sweats, St. Paul and the Broken Bones, The Revivalists, and Ivan Neville’s Dumpstaphunk with Soul Rebels are all slated to open select shows.

Any hardcore Stones’ fans out there want to split the cost of tickets?

This Week in Yeah, Probably

Jokes on y'all: It's just 18 hours of the 'Fitter Happier' voice reciting compsci textbooks https://t.co/l9YdCBPP2Y

Best known for his “Right Place, Wrong Time,” Dr. John made a name for himself in the 60’s, playing with the Wrecking Crew, before going on to play with everyone from Cher to Frank Zappa. He was inducted into the Rock ‘n Roll Hall of Fame and won six Grammys.

One of his last releases was the 2012 album, Locked Down, produced by Dan Auerbach of the Black Keys. Rolling Stone called it one of the best albums of the year.

There were plenty of tributes on Twitter following the news of his death, but this one might be my favorite.

I once ran into Dr John backstage at a festival and asked him if he was still friends with van morrison and he said "Dat motherfucka owes me 75 bucks. Now tell me son where's the catering up in this shit? I gotta send my runner to get me a plate"

Here are a couple more for good measure.

"You wanna do some livin' before you die. Do it down in New Orleans." – Dr. John pic.twitter.com/amOksplBtB

Didn’t he ramble. One of the greatest American originals has passed. Good night, Mac. And know that the legacy of Dr. John will live forever in the streets and music halls of New Orleans and everywhere else in this world that holds music precious.

"Dr. John's music and legacy will forever be imprinted on my soul.”-John Fogerty pic.twitter.com/puu6UDTNMM

it’s never too late for u legend https://t.co/oqTlRvf9zt