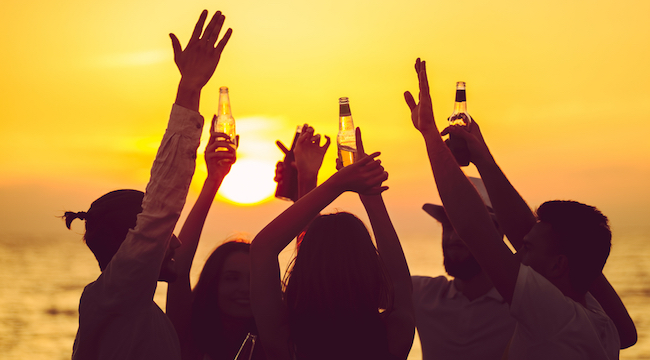 Traditionally speaking, New Year’s Eve is a day when people around the world get wildly drunk in order to wake up at noon on January 1st with a champagne-fueled hangover and the terrible realization that they’re going to have to go back to work the next day. You might be able to solve the first problem by drinking copious amounts of Gatorade, but there’s not much you can do to deal with the second one.

Celebrating the holiday in the Northern Hemisphere normally means bundling up in multiple layers and spending as little time as possible outside while you’re heading to a party, but if you’re lucky enough to live below the Equator, you can spend the entire day celebrating in the sun.

A group of people in New Zealand did exactly that when they headed to an estuary located on the Coromandel Peninsula on the country’s North Island. However, they ran into a bit of a snag thanks to a recently instituted ordinance that banned people from drinking in public.

After a bit of brainstorming, the revelers came up with a way to get around the law: building an island in the middle of the water.

According to the Sydney Morning Herald, the group took advantage of low tide by grabbing some shovels and building a giant pile of sand complete with a picnic table. They claimed they were exempt because the island was located “in international waters,” and while that claim might not hold up to much scrutiny, the police in charge of enforcing the law looked the other way, with one officer saying “That’s creative thinking – if I had known that I probably would have joined them.”