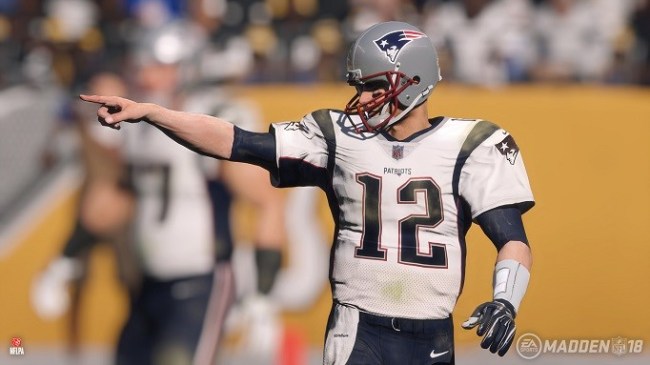 Football season is nearly upon us and that means playing Madden with our dear friends and trouncing them because they are a devout Chicago Bears fan and refuses to use any other squad despite how much they currently suck. But for those of us who are more concerned with winning games in Madden despite our team loyalty, you need to know which NFL players are monsters in Madden 18. EA Sports has been slowly releasing the ratings of the top players and three of which have been bequeathed the coveted perfect 99 rating. The members of Club 99 include:

Wait, do you hear that? That’s the silence of Brady’s critics. He’s the G.O.A.T. You get to be named that after winning five Super Bowl rings, the most recent of which was won after the greatest comeback in Super Bowl history. For that, he’s earned his spot in the coveted Club 99. Inside sources here at EA say that this was Brady’s biggest goal all along. I’m basing that on a complete lack of inside sources though, and have zero evidence to support that theory.

This dangerous of a QB evokes memories of 2004 Michael Vick who was able to dominate Madden games, of course not with the accuracy of Brady, but with the speed and mobility that made him a beast. In the quarterback department, Brady edges Aaron Rodgers who has a rating of 98 and Matt Ryan with his 96 rating.

The Seattle Seahawks and the Dallas Cowboys have seven players rated 90 or higher, more than any other team. The next closest is the New England Patriots with four superb players. The New York Jets have a severe lack of quality players with their highest-rated player only at 85 and only six over 80. Madden 18 drops on August 23, 2016.