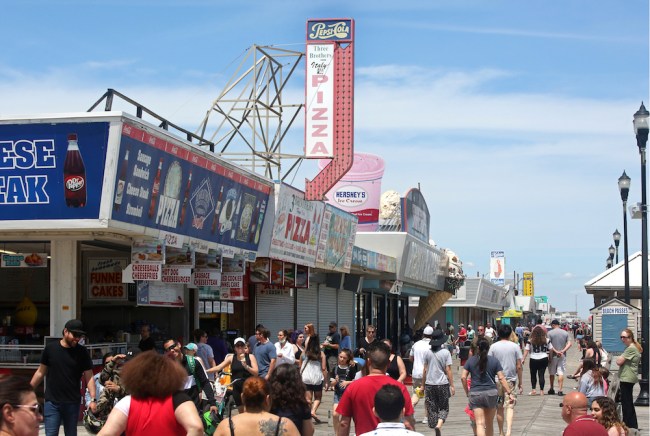 It was a busy morning in Seaside Heights, NJ, and the beach town commotion has nothing to do with New Jersey fully opening after coronavirus.

Seaside Heights were out at 6:30 am talking a man down from a 170-foot boardwalk amusement ride.

News 12 New Jersey is reporting that Angulo harnessed himself to the ride to protest recent charges filed against him.

Here’s an image of Angulo just hanging out high above the NJ beach.

A guy has climbed a ride on the Seaside Heights Casino Piet Boardwalk…… apparently it’s in protest of unfair charges against him by local police. Okay.

Dale and I got to the beach clueless like WTF is going on?? pic.twitter.com/mQ5olzFsTD

Apparently, Angulo came down after a few hours and was escorted away.

Well the guys name is Chris and he made his descent. Looks like he spoke calmly with police, shaking hands, gave an officer his flag to fold and then was taken away. Seaside Heights is never boring. pic.twitter.com/ettVPc4vX6

This isn’t the first time cops have had to talk Angulo down from insane heights or an amusement ride.

After Hurricane Sandy back in 2012, Angulo climbed the sunken Star Jet rollercoaster to place an American flag on top.

He was arrested and committed to a psychiatric ward after the incident.

Last year, Angulo tried to carve a massive peace sign into a giant ice disk on a Maine River.