O.J. Simpson Calls B.S. On Antonio Brown Threatening To No Longer Play Football Because Of Helmet 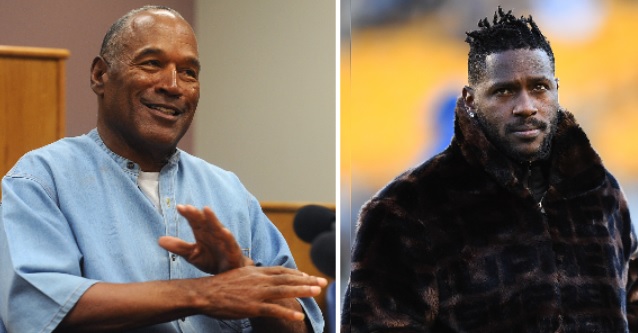 It seems like everyone has thoughts on the Antonio Brown-Oakland Raiders situation, including O.J. Simpson of all people.

Earlier today, Brown filed a grievance with the NFL because they weren’t allowing him to wear his old outdated helmet that does not comply with the league’s new helmet policy.

Apparently Brown is so upset with the league that he told the Raiders that he would “no longer play football” if the NFL wouldn’t play with his preferred helmet.

O.J. Simpson, who has been active on Twitter for the past month or so, decided to make a video where he calls b.s. on Brown.

The man is making $50 million in the next three years, iF you’re telling me that he’s going to give up that type of money because the style of the helmet, look you don’t want to go to training camp, don’t go. but giving up that money because of the helmet. I call b.s.

Of course the Internet immediately had jokes about O.J.’s video about AB.

OJ thanks for being a voice of reason for this situation. You are nothing but a class act and a great role model for us all! Every woman deserves to marry a man like you!

If the helmet don’t fit… he has to quit.

Dude, would u mind lowering that golf club? Given ur history with things, e.g kitchen knives, it feels a little uncomfortable.
P. S: i love u