O.J. Simpson Is Worried About Bill Cosby Going To Prison And Has Advice For Him 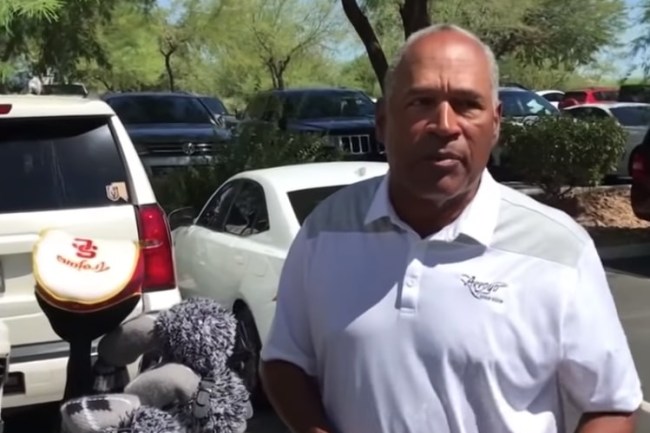 Bill Cosby was sentenced to three to 10 years in a state prison after he was found guilty on Tuesday for drugging and sexually assaulting Andrea Constand at his home in 2004. “This was a serious crime,” said Montgomery County, Pennsylvania, Judge Steven O’Neill. “Mr. Cosby, this has all circled back to you. The day has come, the time has come.” On the same day, Cosby was taken to the Montgomery County Correctional Facility in Pennsylvania. Someone who is concerned about the comedian once known as “America’s Dad” is a man who knows about being a celebrity condemned to a lengthy jail sentence — O.J. Simpson.

TMZ caught up with Simpson while he was golfing in Nevada on Wednesday, who is now a free man after being released from prison in October of last year, and the Juice had some friendly prison advice for Cosby. Simpson warned Cosby that he had better watch his back because “rapists are frowned upon in prison.”

“The problem is the nature of the crime,” Simpson explained. “I’m sure there will be guys protecting him but they’re gonna have to put him in protective custody … because it takes one nut, ya know?” The plan is for the 81-year-old convicted of three counts of aggravated indecent assault to be released into the general population. Cosby will be transferred to State Correctional Institute Phoenix, a state prison in Collegeville, Pennsylvania.

Simpson, who spent nine years behind bars for kidnapping and armed robbery, was also worried for Cosby’s well-being and even proposed a more lenient sentence for the disgraced entertainer. “With his health and his age and the nature of the crime, there’s not a warden in this country wants the responsibility of a Bill Cosby. I think they should let him do his time under house arrest.”

Approximately 60 women have come forward with allegations of sex crimes against Bill Cosby. For his first meal in prison, Cosby will dine of a chicken patty with gravy, mashed potatoes, mixed vegetables, and an iced tea juice packet. The ironic cherry on top, is that the former Jell-O pitchman will get vanilla pudding for dessert.

In case you were worried that you picked the wrong best man for your wedding, please let me refer you to Ahmad Rashad’s wedding to Phylicia Ayers-Allen AKA the one-and-only Clair Huxtable from The Cosby Show, which featured Bill Cosby and O.J. Simpson as his groomsmen.