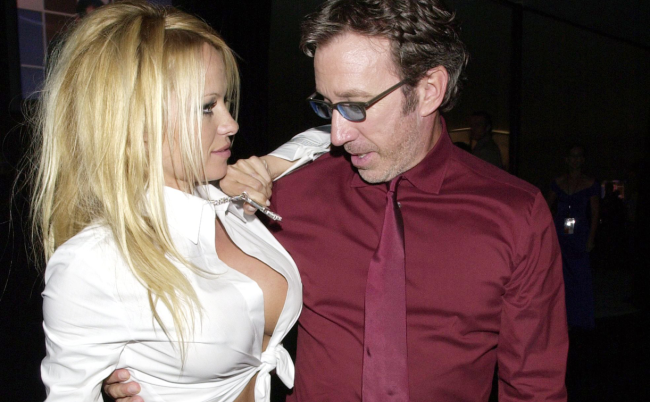 One of the stories that is making the rounds as Pamela Anderson promotes her upcoming memoir Love, Pamela surrounds Tim Allen’s behavior on the set of Home Improvement.

From 1991 to 1993, Anderson played Lisa the Tool Time girl on Home Improvement. It was her first acting role of any length, appearing in 23 episodes of the hit show.

In her memoir, Pamela Anderson reveals a story about her first day on the set of the sitcom.

“On the first day of filming, I walked out of my dressing room, and Tim was in the hallway in his robe. He opened his robe and flashed me quickly — completely naked underneath. He said it was only fair, because he had seen me naked. Now we’re even. I laughed uncomfortably,” Anderson wrote in an excerpt shared with Variety.

He was obviously referring to Pamela Anderson’s appearances in Playboy.

“It was the first of many bizarre encounters where people felt they knew me enough to make absolute fools out of themselves,” Anderson added.

Naturally, when asked to comment on the story, Allen told Variety in a statement from his rep, “No, it never happened. I would never do such a thing.”

The same statement was sent to Entertainment Weekly and TMZ.

“The divorce from Tommy was the hardest, lowest, most difficult point of my life,” she wrote, adding that the sex tape of the couple “ruined” their marriage.

“It’s unforgivable that people, still to this day, think they can profit from such a terrible experience, let alone a crime,” Anderson wrote.

Love, Pamela goes on sale on Jan. 31, the same day the documentary Pamela, A Love Story premieres on Netflix.