Pastor Kenneth Copeland Blows Virus Away, Says God Told Him He Needed To Raise $300 Million Of Income This Year 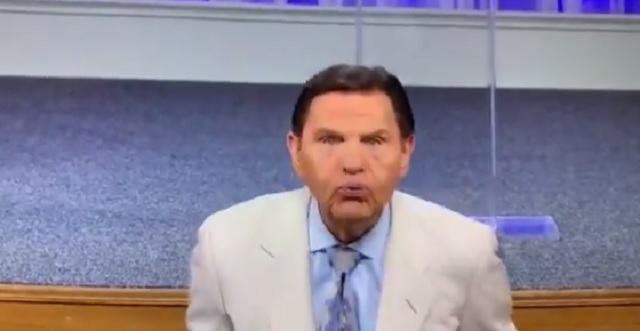 Pastor Kenneth, one of the richest televangelists in the United States, has waged war on the virus that has put much of the country at a standstill.

Last week, pastor Copeland declared the virus to be finished in an insane video that plays more like a WWE promo than a church sermon.

Here is scamvangelist Kenneth Copeland DESTROYING the virus through what I can only describe as a Christian magic spell.

"In the name of Jesus… I execute judgment on you, COVID-19!… It! Is! Finished! It! Is! Over!" pic.twitter.com/EyRosWxcHp

This week the good pastor is trying to blow away the virus so that God could kill it with heat and wind.

Kenneth Copeland used his breath to blow the virus away. pic.twitter.com/flypogxqPL

1. Copeland declares the wind of God to blow to destroy COVID-19. 2. He then says it doesn’t have to be a fast wind. 3. Then the Lord tells him “It’s even better if there’s no wind at all. 🤔 🤷‍♂️ pic.twitter.com/tFWc7Mv8lD

According to Pastor Copeland, God told him three years ago that he needed to raise $300 million of income this year and he wasn’t going to let the virus stop him from reaching that goal.

Here is scamvangelist Kenneth Copeland saying God told him his ministry's income this year "had to be $300 million." (HAD to be!)

Don't worry. His lawyer wrote up a contract and "it is on file in Heaven."

He explained all this to a couple of men in his empty church. pic.twitter.com/MQsfQtyZD3