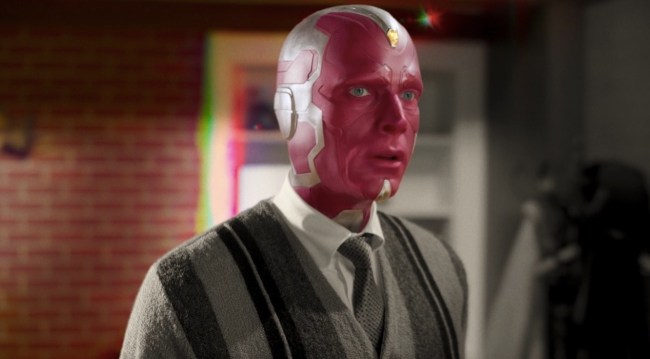 Who is your favorite Avenger? Take a second to think about it. Mine’s Doctor Strange. The mind-bending nature of his power set and the tragic arrogance of his hubris that leads to most of his problems make for a combination that I find to be the most compelling in the Marvel Cinematic Universe.

Do you know who I bet didn’t pop into your head? Vision. Despite being in the MCU for seven years now, Paul Bettany’s synthezoid has yet to become a fan favorite, to say the least. The poor guy doesn’t even get many plaudits at home, either, as the 50-year-old actor recently revealed on Late Night with Seth Meyers that his kids think he plays the “worst” Avenger.

During a recent interview on Late Night with Seth Meyers, Bettany was asked if his kids thought it was cool that their dad is an Avenger. While he said, “Yes,” Bettany quickly noted that “they torture me with it.” He also stated that he’s never their favorite Avenger, even telling the audience that his kids changed his Disney+ avatar, a picture of Vision, to say “Worst Avenger,” for which Meyers then provided photographic proof.

“Yes, but they torture me with it. My daughter has moved through all the different Avengers as her favorite. It’s never, never me. And, actually, just recently, I turned on – I wanted to watch Moon Knight, which is fantastic. And I tried to log in to my Disney+ account, and they had edited my profile.” [ScreenRant via Late Night with Seth Meyers]

While Bettany’s kids may be right about Vision in terms of popularity — not sure you’ll ever come across anyone who says Vision is their favorite Avenger — the character certainly isn’t the “worst” in the traditional sense at that distinction belongs to Peter Quill, whose selfishness blew the Avengers’ attempt at defeating Thanos in Infinity War.

Plus, outside of Loki, I’d argue that WandaVision is the best Marvel Cinematic Universe show to hit Disney+ yet, and that was thanks in large part to the performance of Bettany as the so-called “worst” Avenger.

Bettany can most recently be seen in A Very British Scandal alongside Claire Foy, which hit Prime Video last week.