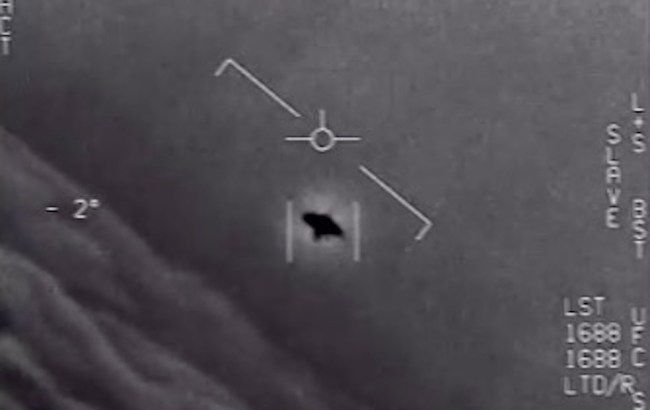 Like most reasonable people, I 1000% believe in aliens. I believe they’re out here and that they’ve probably been here. May have pitched in a tentacle or two to help build the pyramids, who knows.

Despite the acceptance of extraterrestrial life, though, that doesn’t mean I seek it out. I never watched the Bob Lazar documentary on Netflix, nor do I consume alien content in general. It’s just not something that regularly comes across my radar (other than the excellent posts co-worker Doug on the subject).

But what I am is a Blink-182 fan — they were my favorite band growing up — so naturally, I follow the trio of musicians on social media, which is how I came across this super alien-y UFO video. As I just mentioned, I’m certainly no UFO connoisseur, but I’ll be damned if this isn’t the most nefarious looking unidentified flying object I’ve ever seen. This such a stereotypical looking spacecraft that it’s essentially the UFO emoji.

One of the videos shows an incident from 2004, and the other two were recorded in January 2015, according to Sue Gough, a Defense Department spokeswoman. The videos became public after unauthorized leaks in 2007 and 2017, and the Navy previously verified their authenticity. [via CBS News]

You can check all of the Navy’s recently declassified intel, including the, UFO videos, here. Unfortunately, some of them come as WMV files, so you have to convert them to MP4 files. I’ve taken the liberty of posting one of those videos, titled “GOFAST” by the Navy, below.

As is the case with most UFO news in this country, former Blink-182 guitarist and singer Tom Delonge seem to be involved in the video’s release, as the long-time alien enthusiast posted to his social media saying that “the Pentagon just officially released my videos.” He’s been singing about it for decades and it’s becoming increasingly real: aliens do exist.