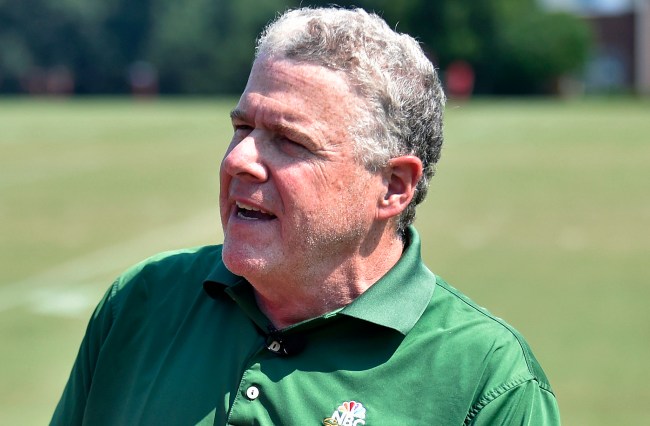 It’s been almost 15 years since Twitter arrived to finally address the needs of people who’d desperately been searching for an online space where they could say whatever’s on their mind as long as those thoughts could be conveyed in 140 characters or less. In hindsight, you kind of have to wonder who the hell Jack Dorsey was trying to appeal to when he decided to pursue the idea, but when you consider he’s amassed a net worth of over $8 billion while overseeing a platform that’s actively used by over 300 million people on a monthly basis, it seemed to work out pretty well for him in the end.

I didn’t really understand Twitter’s appeal when I signed up for an account to see what all of the fuss was about around a decade ago only to quickly find myself burdened with a crippling addiction I’ve been grappling with ever since. In addition to being an invaluable resource for getting news the second it breaks and being absolutely unparalleled when it comes to curating a feed of information catered to your specific interests, it also provides a fantastic dopamine rush even if you only manage to get a single retweet and three likes on a post you were absolutely positive was going to go viral.

Despite its undeniable benefits, there’s a debate to be had about if Twitter (and social media as a whole) has actually managed to make the world a shittier place than it would’ve been if it’d never been invented. It’d be nice if it simply existed as an online vacuum but that’s sadly not that case, so even if you manage to largely avoid wading into the toxic sludge of bigotry and harassment a sizeable chunk of its foundation rests upon (or even avoid the platform entirely), you’re not immune to surprisingly sizeable impact the activity on the platform can have on the real-world.

I can’t imagine constantly monitoring Twitter to stay updated on the increasingly depressing state of the world has done wonders for my mental health, but at the end of the day, I like to think the negative toll it’s taken is at the very least balanced out by some of the incredible content that’s caused me and so many others to think “I can’t believe this website is free” on countless occasions over the years.

While there’s no shortage of people you can follow who use Twitter to amuse the masses with jokes and memes, I’ve found that there’s truly nothing I crave more than users who inadvertently compose misguided tweets that manage to be more entertaining than anything a comedian could ever dream up.

Over the years, I’ve come across a few posts in particular that I think about on a regular basis thanks to their inherent absurdity, none of which I reflect on more often than this thought Darren Rovell shared with the world while reflecting on the lead-up to the 2016 presidential election.

Rovell has mastered the craft of composing tweets with an uncanny ability to make you stare blankly at your screen while trying to figure out why the fuck he thought it’d be a good idea to send them out when it would’ve been infinitely easier to, you know, not do that. However, based on what I’ve seen, sports reporters seem to have a gene that prevents them from exercising any sort of self-restraint on Twitter.

Today marks the seventh year since the heartbreaking death of Robin Williams, who committed suicide at the age of 63 in 2014. I don’t know if I’ve been hit harder by a celebrity’s passing than I was when I learned we’d lost the beloved comedy icon and it was especially hard to process that someone who radiated as much joy as Williams did would take his own life.

I remember scrolling through Twitter searching for more information while attempting to process the shocking news and my feed was filled with people reacting to it—including Peter King. While most people who talked about Williams on Twitter on the night of his death used it to reflect on the impact he had on them, the NFL reporter opted to share a fun little anecdote about the impact the news had on the unsuspecting host at a restaurant in Milwaukee who hadn’t heard about it until King brought him up to speed in the most delicate manner possible. 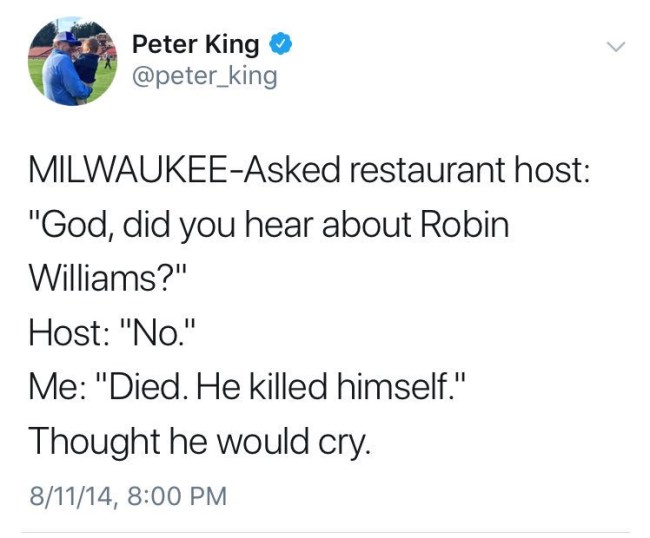 It’s hard to articulate exactly why this tweet has managed to stick with me for seven years but there’s just something about the mental image it conjures that really does it for me. I can’t help but think about this guy trying to hold it together at work because he idolized a celebrity to a point where he almost cried after being told about their death in the bluntest manner possible while King awkwardly fidgets next to him for a few seconds before asking him, “So, do you need me to put my name down or are you going to get me a table?”

King may have felt compelled to tell the world about that interaction as soon as he was seated but it appears he eventually came to regret it, as the original tweet has disappeared. Thankfully, it will live forever in our hearts, minds, and the hard drives and servers that are home to the screenshots that will make sure this piece of Twitter history is never lost or forgotten.