I’ve been neglecting my body lately when it comes to proper pizza intake. I think I’ve only eaten pizza twice in the past month and that’s not nearly enough. Once a week is the proper amount of pizza, if not more frequently.

I’ve been on vacation for a few weeks and I was catching up on Twitter earlier when I came across this tweet about pizza size that’s been blowing everyone’s damn minds. It shows how one large pizza is actually more pizza than two small pizzas which is apparently confusing as shit to all the people who often order two small or medium pizzas believing they’re getting the most bang for their buck.

Here’s the tweet that everyone seems to be mind f*cked over (reactions below):

Have you let that sink in? One 18-inch pizza has 28 more square inches of pizza than two 12-inch pizzas combined. Your average Twitter user cannot handle this information:

This person points out that this is actually the first-ever great explanation for kids on why math is important.

Finally! I can now coherently explain to my 10 year-old why math is important in life: without math, you might unknowingly spend more for less pizza!

Have the Big Pizza lobbyists been keeping this information a secret for all these years? Is this something they’ve sought to keep hidden?

The pizza industry has known this for years but kept their studies hidden. Thanks for speaking truth to power, Andy.

Playing devil’s advocate, this person points out that it’s not actually about the total amount of pizza but more so about how the slices are divided.

I mean YES! This is True. This is true in terms of Factually accurate. But if you have a party of lets say 4 people. Everyone getting 4 slices is gonna be a better party than everyone getting 2 slices that are "bigger"

Someone was quick to point out their unit of measurement is shit.

A ‘slice of pizza’ is not a reliable unit of taste, volume, or value.

Who the hell orders pizza like this, honestly? Have you ever met anyone like this on the planet?

Real talk, I always calculate the area of pizzas on the menu, then calculate which is cheaper per square inch prior to purchasing. Saving dough if you know what I'm sayin' https://t.co/qHpw6eZqvq

All this talk about pizza and I’m finding myself dreaming about this pie I had a few days ago in Barcelona. It was topped with Iberico Ham and fresh Burrata. Pure bliss. Now I think I have to get pizza for dinner because I won’t be able to stop thinking about it. 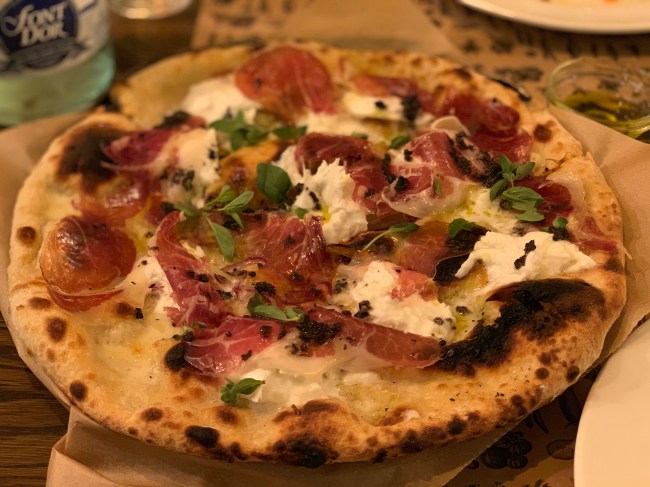