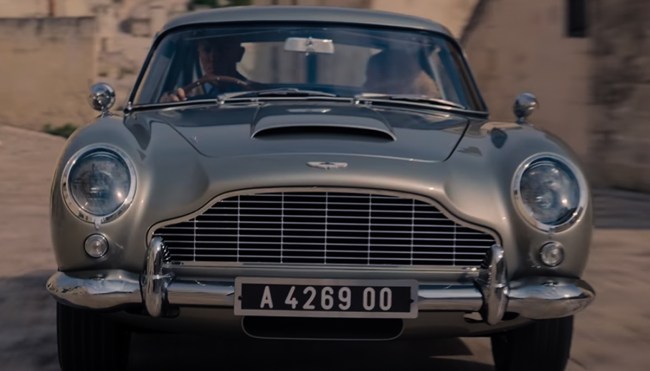 James Bond has hopped behind the wheel (and, more often than not, put a tremendous dent in the value of) dozens of luxury vehicles over the course of the 27 movies that comprise the franchise that kicked off with 1962’s Dr. No.

A good chunk of those rides have been equipped with the various gadgets his trusty sidekick Q installs to make it easier for the spy to do spy things, including what may be the most iconic vehicle in Bond’s figurative garage: the Aston Martin DB5 that made its first appearance in Goldfinger.

That vehicle featured a wide array the Chekov’s Gadgets that Bond would ultimately deploy over the course of the film, including tire slashers, a retractable bulletproof screen, a couple of machine guns hidden behind the headlights and, of course, the red button used to trigger the ejector under the passenger seat.

The DB5 also housed a slightly more mundane feature in the form of the revolving license plates that probably wouldn’t come in super handy if authorities were told to be on the lookout for a silver Aston Martin implicated in a litany of international crimes.

However, according to CBS Los Angeles, a similar gadget may have helped two suspects evade capture for as long as they did before the Irvine Police Department tracked down a Mercedes-Benz believed to be involved in multiple burglaries.

The alleged burglars were arrested earlier this week after someone phoned in a tip after spotting the white C300 in question pull into a parking garage. While conducting a search, officers found items taken in one of the burglaries and an array of tools believed to have facilitated it in addition to the most surprising discovery of all: a device capable of flipping the license plate to obscure the details (unlike Bond’s car, it was replaced by a blank slate as opposed to another tag).

It appears there’s also a chance the suspects fell victim to the aforementioned oversight that undermined the utility of the legally dubious gadget (which can be purchased for around $250 online). The car was also outfitted with a set of custom white rims, a detail that was included in the description that ultimately led to the vehicle being discovered.

At least they tried.