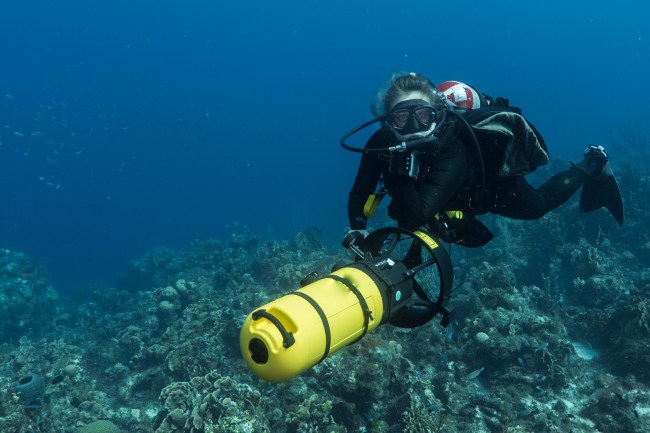 A man who was wanted by the FBI in connection to a $35 million Ponzi scheme briefly evaded capture by pulling a Sea Scooter out of his car and jumping into a frigid lake where he’d hideout for 30 minutes until the cold became unbearable and he had to retreat to dry land where the FBI was waiting for him.

The report from SacBee sounds like something you’d expect to see as the subplot in an episode of Archer:

When FBI agents went to arrest Matthew Piercey, 44, of Palo Cedro near Redding on Monday, he hopped in a pickup and led them on a chase that went off-road twice, prosecutors said. He eventually stopped on the shoreline of Lake Shasta, north of Redding.

“Then, Piercey abandoned his truck near the edge of Lake Shasta, pulled something out of it, and swam into Lake Shasta,” federal prosecutors wrote in court documents calling Piercey a flight risk. “Piercey spent some time out of sight underwater where law enforcement could only see bubbles. He remained in the frigid water for approximately 25 minutes.”

When Piercey finally emerged from the lake, agents discovered he had grabbed the Yamaha scooter that allowed him to move around submerged. (via Sacbee)

Here’s a local news report on it:

After he was checked for hypothermia and it was determined he didn’t need treatment he was then given dry clothes and arrested. Details of the Ponzi scheme sound exactly as you’d expect them to, nothing surprising there. What I’m wondering the most, however, is when and why did he purchase the Sea Scooter?

Was this just a cool ‘rich person toy’ that he’d picked up for recreational use or is my imagination correct and he saw the Sea Scooter on a shelf and was like ‘yup, this is it. This is how I’ll make my grand escape.’ And was just waiting for the authorities to find him before he made his way to some lake he knew like the back of his hand aaaaaaand that’s where the plan ended because he didn’t anticipate the FBI agents just waiting for him to come back to land nor did he think the water would be cold enough to induce hypothermia. Surely that’s too outlandish to be based in reality and it’s all in my head but man, wouldn’t that be wild?

Here’s what a Yamaha Sea Scooter looks like in action, by the way:

If you want to read more about this, you can head on over to Sacbee.