President Obama Gives Drake “Permission” To Play Him In A Movie 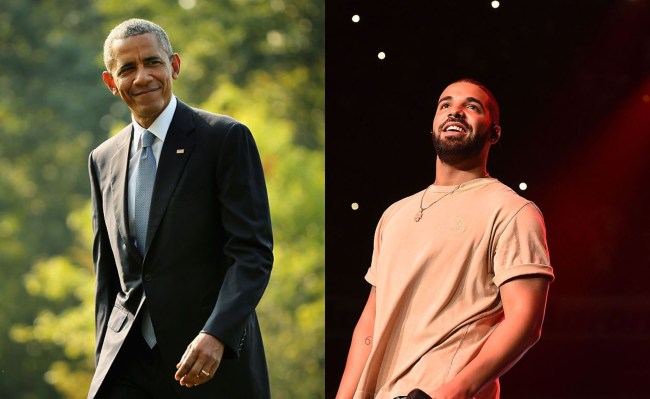 Drake is going to get back into acting one day, isn’t he? Just seems like the natural progression of his career. After accomplishing all you possibly can in the rap game, I could easily see Drake going back to his roots and performing in front of the camera instead of on the stage. And if he does make that move, he’s at least got something to work towards, as former President Obama recently said in an interview that Drake’s got his permission to play him.

“I will say this,” President Obama said in an interview with 360 With Speedy Morman,. “Drake seems to be able to do anything he wants. That is a talented, talented brother. So if the time comes and he’s ready? You know what, Drake has — more importantly, I think — my household’s stamp of approval. I suspect Malia and Sasha would be just fine with it.”

Coincidentally enough, Drake actually expressed playing Obama over a decade ago, as he told Paper Magazine “I hope somebody makes a movie about Obama’s life soon because I could play him.”

“I watch all the addresses. Any time I see him on TV, I don’t change the channel. I definitely pay attention and listen to the inflections of his voice. If you ask anyone who knows me, I’m pretty good at impressions,” he added.

Some sort of prestige drama about the life of Obama coming out in the next decade is essentially a given. With Drake still being just 34-years-old (damn, this dude’s really been famous forever), he’s actually in the right age bracket to play the up-and-coming Illinois Senator, who was 47-years-old at the time he was inaugurated as President of the United States back in 2009.

Personally, I’d like to see someone like John David Washington (36-years-old) take on the role as he’s got the dramatic chops to play a character as influential as the first Africa American President.