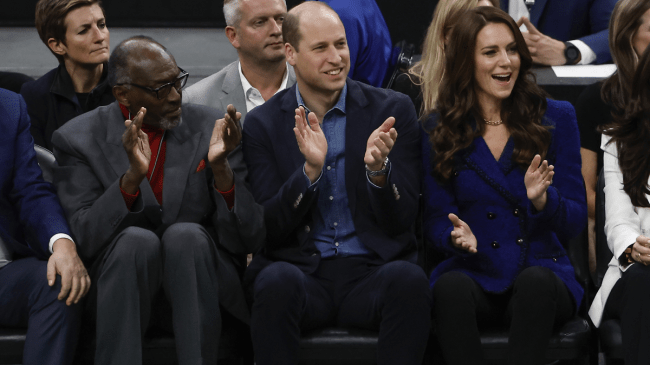 The Boston Celtics had some royal company in attendance for their most recent outing against the Heat. Prince William and wife Kate Middleton sat courtside on Wednesday as they took in the sights at the TD Garden.

And an exciting night it was.

The offense was on full display as the C’s took down Miami 134-121. Jayson Tatum scored a game-high 49 points to lead his team to its NBA-leading 18th win of the year.

Tatum impressed his royal viewers, connecting on shot after shot in one of his best performances of the season. In fact, his fantastic outing led to a hilarious viral clip of Prince William explaining to his wife just how good Tatum’s game is.

Prince William after another Jayson Tatum 3.

After seeing the guard sink one of his eight three-pointers on the night, he turned to Kate and properly remarked, “He’s very good.”

The clip is now circulating social media and creating quite the reaction in the process. Fans are posting their comical responses to seeing Prince William at the game on Twitter.

One NBA fan wrote, “Smashing match,” in a hilarious impersonation of the Prince.

The couple is in Boston for a three-day visit that will culminate with the Earthshot Prize awards on Friday. Also on the itinerary are a trip to City Hall and a meet and greet with the President. It’s their first trip to the states since 2014.

The two got plenty of facetime in the arena Wednesday night, popping up on the jumbotron in-game. Fans chanted, “USA,” in the spirit of the World Cup. The USMNT tied England in a group play match earlier this week, and both will now be moving on to the round of 16.

Fans respond with a “USA!” chant as they show The Prince and Princess of Wales on the Jumbotron @celticsblog pic.twitter.com/QaMCSXSlAt

Hopefully Prince William makes a few more appearances at basketball games in the future because fans need more of this courtside entertainment.