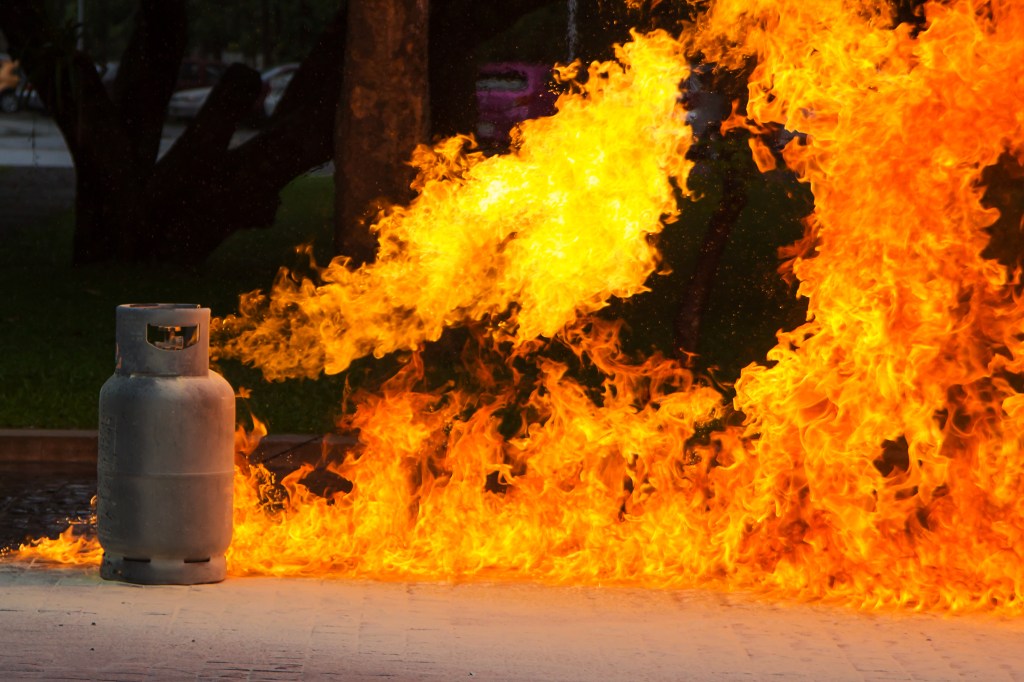 A crash on the Long Island Expressway caused by ‘black ice’ on Tuesday night turned into a wild scene when 300 propane tanks exploded on the highway and it looked like what you’d expect to see in a war zone and not just down the road from LaGuardia Airport.

The accident and explosion occurred near Junction Boulevard in Queens, according to the Post and it was in a portion of the highway where onlookers in high-rise apartments had a bird’s eye view of the raging fire. According to reports, police found that a semi-truck overturned after sliding on black ice, likely in an attempt to avoid hitting another car that was skidding from the black ice.

Since this was in NYC there were a lot of people around to film the dramatic footage of tank explosions and a raging fire on the Long Island Expressway. You can see the propane tanks littered throughout the road with a massive fireball blazing. It’s all pretty surreal.

Here are a few clips from the massive blaze in Queens:

Here are some tweets which give a different perspective of the mayhem which unfolded on the highway:

A truck carrying propane tanks flipped and burst into flames while on a New York City expressway early Tuesday, fire officials said. The explosion occurred in Queens on the Long Island Expressway around midnight after the tractor trailer overturned when it struck a barrier, NYD pic.twitter.com/15zoZcHil4

Here's a video. You can hear the explosion. I can't see clear what kind of car from my side. I am sure people from the building across may have better shot. pic.twitter.com/iCB0BovEzO

this was the propane truck explosion that happened on the long island expressway last night. it sounded like world war 3 was happening 😳 glad everyone is okay though pic.twitter.com/3PxvHj5HYr

My first thought was ‘I hope everyone involved is okay’ and my second thought was about how this likely created a traffic jam so bad that every street across all five boroughs was backed up. I’m envisioning people stuck in traffic for six hours from this. I got stuck in hours-long traffic jams for much less. President Barry Obama was eating at Carbone on my old street when I was trying to get out of town for a holiday weekend and it took me 2 hours to travel a mile.

Side note, can anyone out there recommend their favorite propane-fueled outdoor fire table? I’m in the market. I have my eye on one that’s great. A friend has it. But I’m curious if anyone out there has one and has strong feelings about it. Hit me up on Twitter at @casspa if you’ve got some thoughts on this or find me via email at cass@brobible.com.