Father And Son Confronted By Pack Of Raccoons, Coyote, In San Francisco Park – ‘This Feels Like End Of Days’ 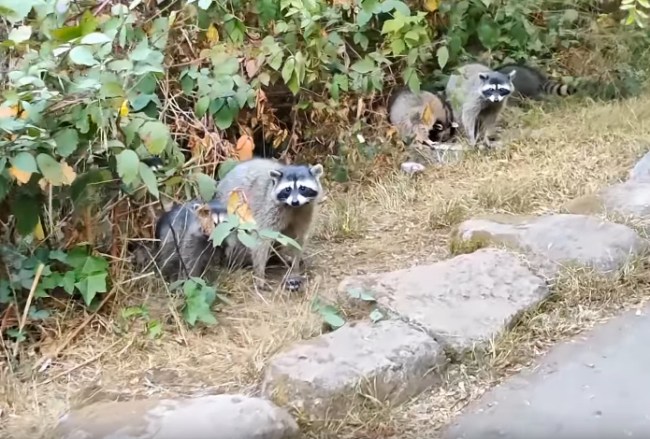 A father and son were walking their dog through Golden Gate Park when they were startled by an unusual sight – 14 raccoons just strolling through the park in plain sight.

“It was so surreal…a posse of bandits…like out of a movie,” the dad, Marc Estoque told the SF Gate. “And then two minutes later there was a coyote. I was waiting for the unicorn to pop out.”

As the pair were marveling at the cute but dangerous raccoons, a coyote appeared in the brush.

Estoque posted a video of the surreal experience to YouTube.

Estoque wrote in the video description:

My son and I were walking in Golden Gate Park the other day when we were greeted by 14 raccoons, (4 were in the bushes) and a Coyote in broad daylight on a trail next to North Lake (43rd and Fulton)

Everyone is fine, Raccoons, Dog, the Coyote and my son and I. What a crazy world we live in. Please be careful out there…

Estoque told the SF Gate that the raccoons appeared to be looking for food. He shared the video in an effort to raise awareness about the problem with people giving the park wildlife snacks.

A spokesperson for San Francisco’s Recreation and Parks Department told the newspaper that raccoons are problem in the area.

“We’ve been posting signage and doing education and outreach in the area talking to people about the harmful consequences for the animals and handing out flyers in English, Chinese and Spanish,” said Tamara Aparton. “Rangers have also increased patrols in the area.”