Rapper Blueface Gets Compared To R.Kelly After Video Shows Women Living In His Home Sleeping On Bunk Beds And Getting Tattoos Of His Logo 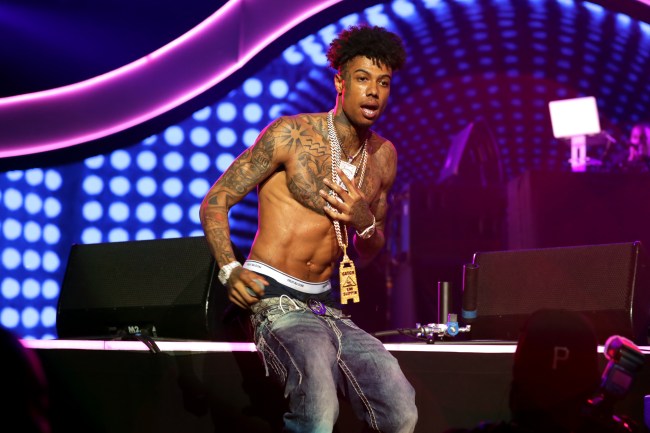 Rapper Blueface has a pretty bizarre lifestyle and people have questions.

On Sunday, the LA-based rapper raised eyebrows when a video went viral that featured several women sleeping in bunk beds at his home. In the video, Blueface could be heard telling the women that they needed to get a tattoo of his logo (blue Benjamin Franklin face) or they were getting kicked out of the house.

Dawg got the bunk beds like Heaven Gates in the crib pic.twitter.com/ibZWZdbh0U

Here’s one of the women showing off her Blueface tattoo on Instagram.

Apparently, the women are taking part in a homegrown reality TV show called the “Blue Girls Club” where the women have their phones taken away, have to fight each other, and compete in other challenges while inside the home.

The Internet immediately compared Blueface to R.Kelly, who has been accused of kidnapping, forced labor, and multiple sexual assault allegations.

the last thing you wanna be is trending w/ R Kelly pic.twitter.com/yd2cKoMTja

“Get tatted or Go home”.. that “Surviving Blueface” Doc gon be crazy https://t.co/ZLWfA10O5y

Blueface got these girls living like they’re in a group home.

Blueface had like 1 song. I'm not understanding how he funding all that.

No but really I hope someone checks on those girls involved with that Blueface guy….and why tf are people joking about it like did we not learn from R Kelly

sleeping in bunk beds and getting tatted for blueface. help me understand…………… https://t.co/7AKLQHF3uJ