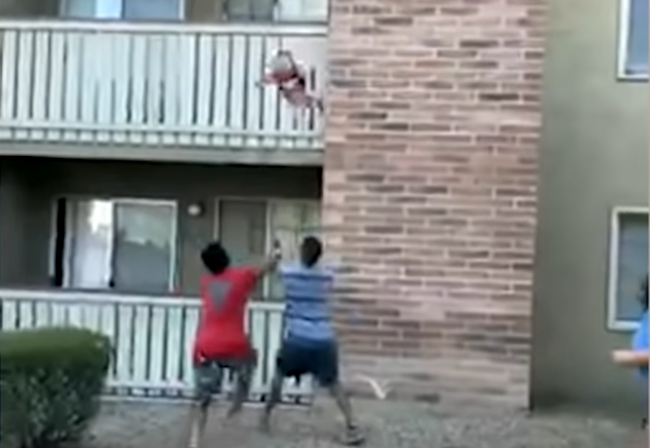 Philip Banks, a 28-year-old former college receiver and former US Marine, knew he needed to help when he saw an apartment in his complex full engulfed in flames.

Banks ran outside barefoot when he heard a commotion and arrive to find a woman preparing to toss her young son off the third-floor balcony down to another man.

“There wasn’t much thinking,” Blanks told KABC. “I just reacted. I just did it.”

As the video shows, the former Marine and wide receiver at Saddleback College in Mission Viejo, California, caught the boy just before he hit the ground.

“His ankle got twisted up as I was diving,” Blanks told KABC. “The guy who was there with me — it looked like he wasn’t going to catch him. So that’s why I stepped in. I just wanted to make a better catch.”

The 3-year-old and his 8-year-old sister were critically injured in the fire.

Their 30-year-old mom, Rachel Long, did not survive.

Blanks is now trying to find the two children, as well as their dad, to help them during their recovery as much as possible.