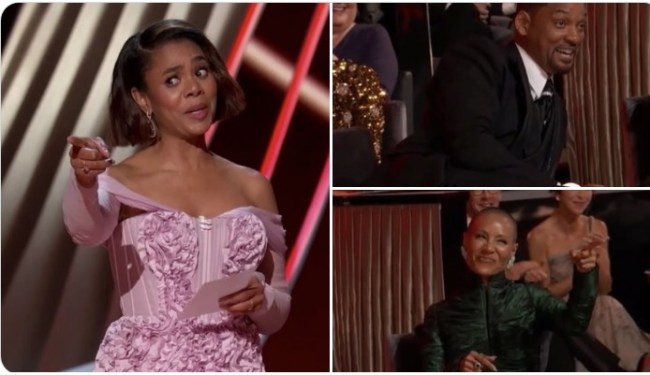 Regina Hall made sure to sneak in an awkward joke about Will Smith and Jada Pinkett-Smith’s marriage during The Oscars.

Will would later confirm that his marriage with Jada was “unconventional.”

“Jada never believed in conventional marriage.… Jada had family members that had an unconventional relationship. So she grew up in a way that was very different than how I grew up. There were significant endless discussions about, what is relational perfection? What is the perfect way to interact as a couple? And for the large part of our relationship, monogamy was what we chose, not thinking of monogamy as the only relational perfection,”

During a segment in the Oscars, Hall began selecting single actors from the crowd so that she could perform a “random Covid test” on them. Hall went on to single out the married Will Smith from the crowd and joked that Jada had given her permission to do so.

‘Will Smith, you’re married and but you’re on the list and it looks like Jada approved you, so get up on here”

Not Regina Hall calling out Will and Jada Smith's entanglement #Oscars 🤣🤣 pic.twitter.com/WPibWJkrwW

Nah fam. They shut up and now people won’t leave them alone. This corny. https://t.co/cNURClk6Hx

Regina Hall was killing me. Especially her entanglement proposal to Will Smith, I'm dead 😂