Remembering ‘Road House,’ A Cinematic Masterpiece Of Yesteryear, As Hollywood Attempts To Ruin Its Legacy 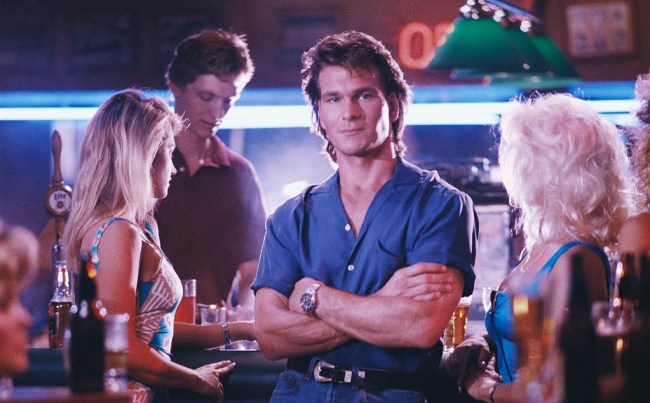 When I was younger, I always figured I’d head west. Maybe pass nights along the way in seedy bars full of loose women and fragile tables, places where the boss man pointed at people like he was holding a pistol. A place where an unseen breeze would keep my bangs in constant flux. I’d head west for an adventure. Along the way, somewhere in Missouri, I’d survive a place with the help of an old friend who showed up on time and an old man who said sage things, and after all the surviving I’d set out once more with a limp to find a girl who would chase with me the sun to its daily conclusion. Together, each adorned in denim, at rest stops and cheap motels, we would pass the nights practicing how someday we’d make more of us.

Life didn’t go like that. It went a lot easier. It went a bit more perfectly. I never had to survive. I never listened to a blind man play music from behind a chicken-wire fence. I never passed hungry nights with only cigarettes and prayer. I never almost died. So now I read the books brave men write and settle into my couch on occasion when my wife goes to sleep early and watch Road House and think about a life more frayed around the edges, a life worthy of a timeless, quotable movie.

Road House is the “Every Rose Has Its Thorn” of movies. A thing that you follow through each time it comes on no matter at what place you enter it because you must. It’s a turtle with a brightly colored shell eating cheese beside a road — you just let it finish.

You absorbed it first when you were a boy and believed men were supposed to fight at night and chase romantic lives with no friends beyond a quiet highway. Then you saw it when you got a little older and hit the stage of life where anything with boobs would suffice. Finally, you watch now to remember those days when a flash of a breast was all that mattered and life was just a series of nights to surrender.

Road House is an American Classic. Not some inaccessible classic you have to delve into and maneuver around. More a classic like SpagettiOs — a thing of nostalgia and smiles.

“It’s my way or the highway,” Dalton says, and I get jealous. I’ve never spoken cliches to a group of serious men. I’ve never karate chopped anyone in the throat. I’ve never walked away and left a crowd wondering if where I was headed a man would die. I’ve never done martial arts beneath the morning sun with only a lake between me and evil.

There’s a scene in Road House where a blonde doctor trying to hide her hotness behind terrible spectacles enters to give Dalton attention. I now know I will never get nine staples below the ribs and be reminded of “31 broken bones, two bullet wounds, nine puncture wounds and four steel screws.” I will never deny anesthetic and say, “Pain don’t hurt.” Swayze speaks, throughout the movie, in two to six word quotes. He only speaks in quotes.

“Nobody ever wins a fight,” he says, ending the scene, applying a clever lather of sweet atop his hardened core.

Dalton asks questions sometimes, but only when he knows the answer.

“You looking for somebody?”

Road House is a movie about a man chasing a dream. If Fitzgerald was born where the wind perpetually blew dust and the sounds of the time were country blues rather than jazz, his character would have chased a girl who could stitch his wounds not prod his ego, a woman who wore panties with a hilariously high arch above the thigh, not elbow-length gloves. Jay Gatsby would have unpacked his mysterious history in Jasper, settled in a city where men kicked away days in wooden rooms decorated with cut-off flannel shirts, not big-city bars where gangsters toyed with baseball. He would have made love in a barn, not a mansion. He would not have died.

Or, hell, maybe Swayze is Nick watching the parties from afar pondering the souls the night corrupts, painting dreams, twisted notions that once free of the sun’s watchful gaze concoct themselves in shivers like reflections on black water.

“It’s quiet and horses let me know if anyone comes around,” Dalton says of his temporary place, a thing outside of everything, a stop-over on a voyage.

The movie has everything. A plumb, dumb bad guy, an evil sidekick in black who wears a saber tooth necklace, a decoration at once ominous and Indian Princess-ish, a woman with a bad history seeking a gentle warrior, liquor, nudity, blood, and a monster truck. The movie is essentially a boner. Inherently man, directed, of course, by a man named Rowdy. It is set in a town where bad men spin the tires of their muscle cars at each exit and good guys befriend frustrated locals. It’s a tribute to a time in America when all the bad guys in film were the same because the Commies were elusive, the good wars were long gone, and genuine terror had not yet howled from its barren mountain cover, presenting our nation a new ubiquitous bad. This movie is of a time when the good guys went by one name and only trusted men whose names were an assemblage of perfect syllabic rhythm.

“Right boot,” Dalton says, revealing he’s seen all terrible tricks before and, besides his every outfit, makes no mistakes.

Road House is old now, dated in a glorious way, and Swayze is gone of this earth. But his memory remains like a shirtless angel in the hazy border of our masculine ambition. His character reminds us of the manliness we once aspired to achieve before we learned how to fold towels, when we were young and didn’t yet know the weight of a banker’s frown. Swayze left us a now-comic portrayal of a then-serious man, a man with dreams of leaving a history behind, a man who speaks in bumper stickers, who coaxed forth our ideas of heading west, maybe, beyond where we existed in order to find a girl, a woman who would let the dark minutes click away under the noisy heat of a body sore from kicking ass.

[Editor’s Note: This was originally published on the 25th anniversary of the movie but with the news of Hollywood’s attempt to remake it, we wanted to resurface this masterpiece of a post that honors the movie that taught us that “pain don’t hurt.” ]