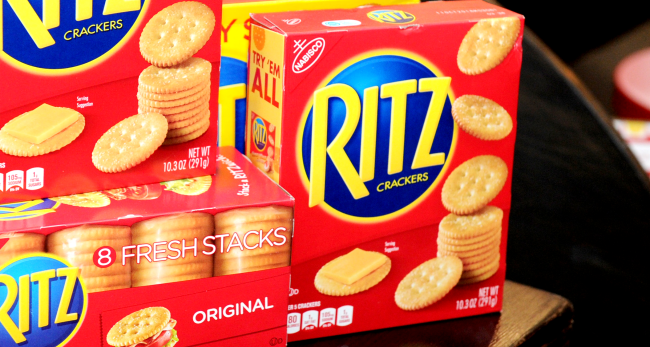 One would think that a food item like Ritz Crackers, which has been around for almost nine decades, would be pretty straightforward and everyone would know everything there is to know about it by now. One would be mistaken.

How many Ritz crackers do you think you have eaten in your life? Probably more than you can even remember if your parents gave them to you as a snack as a kid, but it has to be in the hundreds, if not thousands, right?

The cracker was actually invented by the Jackson Cracker company in the early 1900’s and was called the Jaxon. It wasn’t until after Nabisco purchased the company in 1919 that the cracker’s name was eventually changed to Ritz.

The salty goodness hits the spot in so many different situations. Plus, it is the perfect size for snacking with its seven perforations and a scalloped edge that fit almost perfectly in your mouth.

Speaking of that finely scalloped edge, did you know that it isn’t just there for looks? It actually was put on the cracker for a very specific purpose.

Because it does. And of course, this information was revealed where everything educational comes from these days: on TikTok.

In a TikTok video that’s now been viewed almost 2 million times, Ritz explains that the scalloped edges on their iconic crackers were put there to be used as a tool for cutting cheese.

“What people think the edges on RITZ Crackers are for: Wow, so pretty, aesthetic, beautiful scallops,” Ritz captioned the video on its official TikTok account.

Then, after a quick deomnstration of how the scalloped edges are used to cut a slice of cheese, viewers were left dumbstruck.

“RITZ you are making me question my entire existence,” wrote one viewer.

“I refuse to believe I went an entire 24 years of my life without knowing this,” commented another.

The most common responses, however, were, “HUH?” and “What?”

“Or just grab the cheese with 2 hands and tear a slice,” another viewer commented.

To which Ritz replied, “That works too.”

Now we just need them to explain what those seven holes in a Ritz cracker are for.